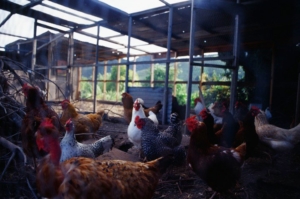 Chicken is one of the most consumed meats in America. According to the USDA, estimates determine that the per capita American consumption of chicken will rise from 28 pounds per person in 1960 to 94 pounds per person in 2020. This is in contrast to the per capita consumption of beef in America, which projections determine will fall from 94.1 pounds in 1976 to 57.5 pounds per person in 2020. This certainly reflects the rising demand for broiler meat, or commercial chicken farmers breed and raise for meat production in the U.S. However, not many Americans wish to work in poultry processing factories. In response to this shortage of workers, many poultry companies use migrant workers to fill their processing lines. Recent reports suggest that these migrant poultry workers are in danger of harsh working conditions and labor exploitation.

Issues with Poultry Processing Plants in the U.S.

Although poultry processing plants use machinery, much of killing, deboning and packaging of chicken still depend on human hands. The processing rooms’ temperature is usually at 40 degrees Fahrenheit in order to reduce microbial growth. However, this cold temperature makes it harder for the line workers to safely use their sharp cutting tools since their hands get stiff from the cold temperature. The factories’ demand to process chicken at a faster pace further compounds this hardship. The U.S. Department of Agriculture caps the speed of these processing lines at 140 chickens per minute. However, reports suggest that many processing plants increase their line speed in order to meet their company’s quota. The U.S. Bureau of Labor Statistics’ data further reflects these dangerous conditions. In addition, line workers repeat the same motion while performing their job of disassembling a chicken. Some reports suggest that 86 percent of line workers suffer from wrist pains, swollen joints and chronic pain in their hands and arms.

Migrant Poultry Workers in the U.S.

Migrant poultry workers fill the labor demand of the poultry industry. The EB-3 visa allows poultry companies to hire migrant workers. As long as a company places two want ads seeking American workers in a local newspaper and a notice on the state jobs board, poultry companies can justify hiring an immigrant instead of an American. Many migrant poultry workers, if documented, agree to what might be less-than-ideal working conditions for a promise of green-sponsorship by their employers.  Responding to this high demand, there are migration consultants outside of the U.S. who charge between $20,000 and $130,000 to help a migrant worker immigrate to America. This high fee can be a cause of poverty for many migrant poultry workers since the majority of them will make less than $20,000 a year.

According to the Human Rights Watch’s 2019 report, nearly 30 percent of meat and poultry workers were foreign-born non-citizens in 2015. Among this number, an estimated one-fourth of the migrant workers were undocumented. This visa sponsorship by poultry companies makes it harder for the migrant workers to protest against the harsh working conditions of poultry processing factories. Whether a migrant worker is documented or undocumented, the recent rhetoric of the U.S. government toward migrants is making many workers in the poultry industry nervous. In 2019, for example, accusations emerged that multiple poultry companies conspired to keep the wages down for their immigrant workforce.

Improving the Poultry Industry in the U.S.

There are many people and organizations that are striving to improve the working conditions in the poultry industry. Many human rights groups encourage the consumers to voice their dissatisfaction with the current state of working conditions in poultry processing plants. By voicing their dissatisfaction, humanitarian groups believe that this will give more power to the migrant poultry workers to voice their plights.

Tyson, one of the biggest poultry meat suppliers in the U.S., made a pledge in 2017 that it will improve the working conditions in its factories. In the pledge, Tyson stated its commitment to reduce worker injury rate by 15 percent until it reaches zero, increase employee retention by 10 percent each year and improve the transparency between the public and its factories. In 2020, the Humane Society of the U.S. and other groups sued the USDA for increasing the line speed at U.S. poultry processing plants. In its 2019 report, The Human Rights Watch encouraged the Department of Labor’s Occupational Safety and Health Administration (OSHA) to take charge of improving the work conditions.

The harsh working conditions and treatment of migrant poultry workers in the poultry industry certainly presents a complicated picture. Chicken is becoming America’s favorite choice of protein as it is surpassing beef in terms of per capita consumption. However, behind every piece of chicken, there are migrant workers who must face constant hardships on a daily basis. The cold temperature of the factories causes numerous physical ailments for the workers, while many forego voicing their plight in fear of deportation. The solution is not to stop eating chicken. Instead, as many human rights organizations have demonstrated, consumers must voice their dissatisfaction with the poultry industry. With the recent surge in the public interest for the working conditions of the poultry industry, many hope that better and more fulfilling working conditions are coming for the poultry workers of the U.S.