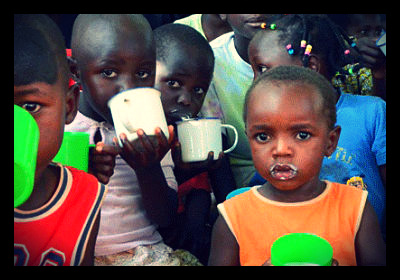 Since conflict started in the Democratic Republic of Congo, children have been fleeing the violence to Rwanda and into the hands of another challenge: malnutrition. The state of food security and proper nourishment in Rwandan refugee camps is becoming dire as nearly 44 percent of children under 5 face serious chronic malnutrition.

However, the Rwandan government is making strides to welcome its new residents with open arms and humanitarian aid. Under the command of Prime Minister Pierre Damien Habumuremyi, the Rwandan government launched the “1,000 Days in the Thousand Hills” campaign back in September of 2013 to combat malnutrition in both its refugee camps and its local population. With the help of the Ministry of Disaster Management and Refugee Affairs (MIDIMAR), the 1,000 days campaign was implemented first in the Kiziba camp in Western Rwanda, then in all five refugee camps in the country.

The mission of the campaign: combat malnutrition using programs that make populations more self-reliant and educated on proper health. The approach: provide children with the proper nutrients for the first 1,000 days from birth until the child’s second birthday and establish local community efforts to produce more nutritious food.

The 1,000 Days campaign in Rwanda is not unique. In fact, similar programs have been implemented in a variety of other locations including Ethiopia, Indonesia and Guatemala. But what makes Rwanda’s campaign special is its focus on integration. Like all of MIDIMAR’s programs, the 1,000 Days in the Thousand Hills campaign aims to connect the refugee and local populations by using their combined forces to solve mutual problems. All practices used in the local population are being used in refugee camps and vice versa.

What are these practices? As established, the campaign seeks to make populations at risk more self-sufficient while still receiving help to reduce malnutrition. Programs include setting up kitchen gardens and animal breeding programs. At the start of the campaign, 315 kitchen gardens were set up and 151 families received rabbits to breed, eat and sell. The hope is to make refugees and local populations independent with livestock and farming techniques that provide them with greater nutrients.

On top of this, the 1,000 days campaign aims to provide children with the necessary sustenance for healthy development and nutrition from day one until age 2. This allows children to escape malnutrition and stunting of growth and to have better immune systems and brighter futures. The program achieves this goal both by putting more food into the community and educating parents on what counts as fortified and healthy foods, such as vegetables, fruits and milk. In addition, the campaign seeks to spread awareness on the warning signs of malnutrition and the diseases associated with the condition.

All of this culminates in two results: first, it brings children out of risk of malnutrition by providing them with necessary protein from the start. Second, it pulls populations into a state of food security by providing sustainable ways of harvesting good food.

The program is set to end in October of 2016, but many strides towards success can be taken by then. With any luck and lots of hard work, malnutrition will cease to be an insurmountable problem facing refugees in Rwanda.