Tag Archive for: Microparticles That Could Alleviate Global Malnutrition 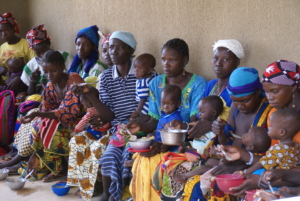 According to the World Health Organization (WHO), iron deficiency is the most common consequence of poor nutrition worldwide. Every year, 2 million children die globally from malnutrition. Efforts to refortify foods date back to the early 20th century, but the technology to stabilize those nutrients in different foods has progressed slowly. In a breakthrough method of encapsulating micronutrients, researchers at MIT have discovered a way to refortify common foods by using biocompatible polymers that have shown in efficacy trials to prevent degradation while being stored or cooked. The new method would allow for better nutrient delivery and absorption. If there were microparticles that could alleviate global malnutrition, such a development, if scaled up, could provide many developing countries with more nutritious food and prevent malnutrition-related diseases that primarily affect children and pregnant women.

Malnutrition primarily affects those living in developing countries and the malnourished often represent 30 percent of their population. Malnutrition presents itself in a variety of ways, but most notably through anemia, cognitive impairments and blindness. Roughly 2 billion people live in low-resource areas where infectious diseases compound the effects of malnutrition. The lack of micronutrients is a quiet and prolonged killer and can cause premature death and loss of economic activity. There is also a direct correlation between those with the least education and most iron-deficient in these countries.

WHO has worked to tackle the causes of malnutrition using solutions such as promoting dietary diversification with enhanced iron absorption and supplementation, noting that solutions must meet the local population needs. Since many of these communities lack more than one vital micronutrient, efforts to supplement the diet can address multiple deficiencies, such as lack of folate, vitamins A and B12. Part of their plan includes programs that aim to eradicate infectious diseases that contribute to anemia, including schistosomiasis, hookworm, HIV, malaria and tuberculosis. Doing so would help end the cycle of poverty that many communities face due to disease and malnutrition.

Microparticles That Could Alleviate Global Malnutrition

The lead authors of the MIT study are Aaron Anselmo and Xian Xu, as well as graduate student Simone Buerkli from ETH Zurich. In the study, they claim to have developed a new way of refortifying foods using a biocompatible polymer microparticle. What is most notable about this new technology for supplementing foods is that the encapsulated micronutrients will not degrade during cooking or storage. Researchers selected the polymer BMC out of the 50 different polymers they tested, after trying them on laboratory rats and later on women. The same polymer is already classified in the United States as a dietary supplement safe for consumption. The next step for the researchers is to advance clinical trials in developing countries with local participants.

The researchers were able to encapsulate 11 different micronutrients using polymer BMC, such as vitamins A, C, B2, zinc, niacin, biotin and iron. They were able to successfully encapsulate combinations of up to four micronutrients at a time. Even after boiling encapsulated micronutrients for hours in a lab, they remained unharmed. Researchers also found that the new microparticles remained stable after experiencing exposure to oxidizing chemicals in fruits and vegetables as well as ultraviolet light. The polymers become soluble in acidic conditions (such as the stomach) and the micronutrients released. An initial trial did not yield a high absorption rate, so researchers boosted the iron sulfate from 3 to 18 percent and were successfully able to achieve high absorption rates, which was on par with typical iron sulfate. This trial added encapsulate iron to flour and used it to bake bread.

History and Limitations of Food Fortification

In its Guidelines on Food Fortification with Micronutrients in 2006, the Food and Agriculture Organization (FAO) of the WHO noted that the most common deficiencies were in iodine, vitamin A and iron, representing 0.8 million deaths annually. Developed nations typically do not experience these levels of malnutrition because they have access to a variety of foods that are rich in micronutrients, such as meat and dairy products. Underdeveloped countries consume mostly monocultures of cereals, tubers and roots. Prior to the 1980s, developed countries focused their efforts on protein-energy malnutrition. While protein-based foods did help to improve nutrition, it was the addition of iodine to foods in the 1990s that helped prevent degenerative characteristics such as brain damage and mental retardation in childhood.

To combat micronutrient malnutrition, WHO promotes greater access to a variety of quality foods for all affected groups. In addition to a more diverse diet, they strategize to create policies and programs with governments and organizations to educate the public on good nutrition, diversify food production and deliverability, implement measures to guarantee food safety and provide supplementation. Having the support of the food industry has been essential since the beginning of the 20th century to include these guidelines in their production of food. Salt iodization in the 1920s expanded from developed countries to nearly the entire world. However, a number of challenges have remained for the refortification of foods.

For example, early on in the fight against malnutrition, a lack of quality evaluation programs on the efficacy of food refortification left nutritionists wondering if the empirical improvements for certain populations were due to supplementation or a combination of socioeconomic facts and public health improvements. Analyzing the data with a comprehensive efficacy trial became the norm in an effort to better gauge the efficacy of their efforts. Other issues remain such as interactions of nutrients, the stability of polymers, correct levels of nutrients, physical properties of ingredients and how well customers receive the food. For instance, in large amounts, calcium inhibits iron absorption while vitamin C has the opposite effect in refortified foods.

Implications of the Study

The MIT study, funded by the Bill and Melinda Gates Foundation, modeled its research on the success of refortifying food with iodized salt from the past, incorporating micronutrients into a diet that would not require people to change their consumption habits. According to researchers, the next phase will be to replicate the study in a developing country with malnutrition to see if the microparticles can feasibly enter residents’ diets. They are seeking approval from the WHO Expert Committee on Food Additives. If successful, they will scale up manufacturing of the nutrient additive in the form of a powdered micronutrient.

The initiative could lead to a significant decline in global cases of nutrient deficiencies thereby reducing the effects of anaemia and other preventable diseases due to a poor immune system. By no means would it represent the first technological advance in refortifying foods and increasing access to nutrition, but the addition of microparticles that could alleviate global malnutrition may help many developing nations end a cycle of poverty that disease has perpetuated for generations, increasing their health and productivity in the process.