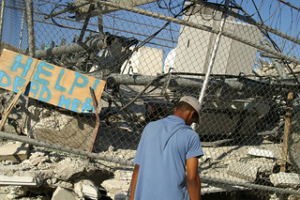 Despite global outreach following the massive earthquake on January 12, 2010, Haiti has been stalled in effectively alleviating the widespread poverty historic to the island, which has increased dramatically after the disaster. President Michel Martelly, elected twenty months ago, has recently proposed a five-point plan of employment, rule of law, education, environment, and energy to help lift his country out of turmoil. But this plan will not affect stagnation unless Haiti addresses its dysfunctional political system, public frustration, and donor fatigue.

1. Political System
The political system in Haiti is one factor that is working against the Haiti earthquake recovery. The system is conducive to winner-takes-all politics, which makes compromise, an essential aspect of a stable political system, difficult to attain. It is also unhelpful that President Martelly faces an opposition-dominated parliament that only exacerbates the inability to compromise. Haiti does not currently have any strong political parties that represent the majority of its poor citizens. This has lead to a system that relies mainly on cronyism rather than public support in order to get things done.

2. Public Frustration
The unfair political climate has led to frustration among the Haitian public. A staggering 350,000 citizens that lost their homes during the earthquake over two years ago are still living in camp settlements across the capital. These people are waiting to see tangible improvements to their daily lives. Their plight has not been made any easier by the drought, two tropical storms and rising food prices. The president faced 128 public protests across Haiti between the months of August and October alone, according to the International Crisis Group.

3. Donor Fatigue
Not only the general public, but also foreign aid donors are feeling frustration over Haiti’s political gridlock. The lack of transparency with foreign aid funds and lack of progress in reconstruction is causing Canada, one of the biggest supporters of Haitian renewal, to reconsider tens of millions of dollars that was meant for the country. According to figures published by the United Nations, only half of the $6.04 billion pledged to Haiti since the earthquake has been disbursed to the country thus far, and only ten percent of that figure was distributed directly to the government. Until Haiti finds a solution for its political woes, the financial aid that Haiti’s earthquake recovery needs could be in a gridlock of its own.

While these issues are important to consider for the Haiti earthquake recovery, it is also important to keep in mind that the international community is still deeply interested in seeing a Haitian recovery. Identifying the key obstacles to any issue is the first step to solving them. Hopefully, steps two to infinity will present themselves sooner rather than later.