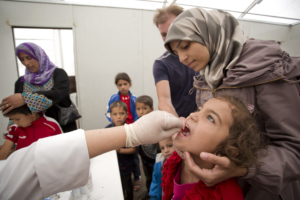 Since the Syrian crisis in 2011, the displaced population has migrated to neighboring countries such as Turkey, Lebanon and Jordan. Currently, 50 percent of the population are children without parents. Mental health issues have risen in the Syrian refugee community since then and the world has stepped up in treating the debilitating aspects of suffering traumatic events. This article highlights the improvements in the mental health of Syrian refugees.

Refugees that have to leave their homes and migrate elsewhere face many obstacles and challenges. Post-migration challenges often include cultural integration issues, loss of family and community support. Refugees also experience discrimination, loneliness, boredom and fear, and children can also experience disruption. Circumstances uproot them from friends and family and cut their education short. Refugees experience barriers in gaining meaningful employment and they face adverse political climates.

Depression, anxiety and post-traumatic stress disorders (PTSD) are all effects of exposure to traumatic events. Traumatic events for Syrian refugees include war terrorist attacks, kidnapping, torture and rape. Meta-analysis all show a positive association between war trauma and the effects of certain mental health disorders. For example, a study examining the mental health of post-war survivors from Bosnia, Croatia and Kosovo showed PTSD as the most common psychological complication.

Post-Traumatic Stress Disorder is a debilitating disorder that intrudes on the patient’s mind. It also intrudes on relationships and the patient’s ability to live a quality life. Thoughts of suicide and/or avoidance are also symptoms of PTSD.

A study of Syrian trauma and PTSD participants found that those between the age of 18 and 65 have experienced zero to nine traumatic events. Of those, 33.5 percent experienced PTSD and 43.9 percent depression. Another study in Lebanon showed that 35.4 percent of Syrian refugees will experience a lifetime prevalence of PTSD.

The National Institute of Mental Health identifies integrated care as primary care and mental health care; cohesive and practical. Primary care practitioners recommend conducting a thorough history check of any exposure to or experience of traumatic events. Health care professionals must be able to effectively address mental health issues. Barriers have long been the cause of mental health issues left untreated. Such barriers include communication, lack of health practitioners to patients in need, the physical distance patients must travel and the stigma of having the classification of “crazy.”

Treatments and Evidence-Based Interventions for Refugees

There have been several test instruments that provided significant results in the treatment of mental health as well as scalable interventions. Currently, the only FDA-approved drug both abroad and in the U.S. are paroxetine and sertraline; both selective serotonin reuptake inhibitors (SSRI). Other instruments include the Narrative Exposure Therapy, Eye Movement Desensitization and Reprocessing. Many found EMDR to be successful in reducing episodes of PTSD and depression in a study with Kilis refugees.

In 2008, the World Health Organization launched the Mental Health Gap Action Programme (mhGAP). This endeavor focused on assisting low and middle-income countries in providing effective mental health treatments. Inventions such as Task-shifting, E-Mental Health and PM+ fall under the mhGAP umbrella. First, the task-shifting initiative aims at alleviating the pressure on a limited number of specialized practitioners. Task-shifting shifts duties and tasks to other medical practitioners which otherwise highly-trained specialists would perform. This initiative is cost-effective and proves to be a promising alternative. Refugees can receive treatment in primary and community care locations instead of specialized facilities. Meanwhile, E-Mental Health and PM+ aim to address multiple mental health symptoms at once, while allowing treatment to remain private and within reach to Syrian refugees. Finally, the EU STRENGTHS, also created under the mhGAP umbrella, strives to improve responsiveness in times of refugees affected by disaster and conflict.

Many Syrian refugees continue to face obstacles and barriers, however, there is hope. Initiatives such as those mentioned in this article provide a promising outlook for the continued mental health improvements of Syrian refugees.