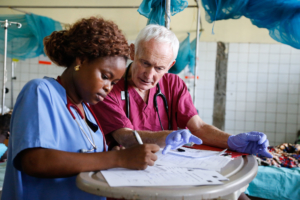 There are historical misunderstandings and under-investments in social care for people with mental health problems. This is even more prevalent among people living in poor countries like Sierra Leone. People in Sierra Leone do not treat mental health as seriously as other physical health disabilities. Sierra Leone has a population of more than 7 million people and there are only two psychiatrists, two clinical psychologists and 19 mental health nurses. There are also only four nurses that have specialization in child and adolescent mental health. With a clear need for psychological professional help, there has been a rise in community healing dialogues in Sierra Leone.

Like many towns in Sierra Leone, Koindu struggled after the Ebola epidemic. Some say that mental disorders and anxiety affected many citizens even after the virus outbreak. Koindu citizens go through similar psychological effects as war veterans.

After experiencing stigmatization and discrimination from within their communities, many survivors of the Ebola outbreak became stressed which increased mental health problems. Koindu’s community suffered distress with only a few mental health providers and little information about psychological pain. The USAID Advancing Partners & Communities project initiated community healing dialogues (CHDs) to provide care to the people.

Trained facilitators lead the community healing dialogues. They unite the community members together to vent their concerns and come up with ways to solve them. The success of community healing dialogues in Sierra Leone is raising awareness about serious problems affecting group members. Community members are discussing economic and livelihood challenges as a group, and creating solutions. People, who formerly discriminated against Ebola survivors, are now accepting them back into their communities.

Once a week, the CHDs gather between 15 to 18 community members to talk about and promote the mental health issues in their communities. There are at least two social workers and two nurses per district to organize and facilitate Community Healing Dialogues. More than 705 community members in 45 communities benefit from this psychosocial care. Depending on the situation, people refer some members to higher-level mental health services.

The World Health Organization (WHO) developed the mental health gap action program (mhGAP) to provide more specialized services. The program trains higher-level health care workers and medical doctors around the country. The workers and professionals use procedures within the program to identify and diagnose possible treatment options for mental disorders.

The African region is widely using mhGAP. It is pursuing professionals who may provide more specialized care at the local recommended hospitals; Kissy Psychiatric National Referral Hospital, Connaught Hospital and Ola During Children’s Hospital. The WHO is collaborating with other partners within the Ministry of Health and Sanitation to provide technical support to continue strengthening mental health services.

There is now a better understanding and acceptance of how to treat mental health within the country. Advanced care solutions along with the community healing dialogues in Sierra Leone are improving the quality of care for the people in need of help.