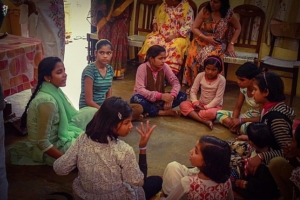 In developing countries like Pakistan, a nation that has faced violence, economic and political instability since its birth in 1947, mental health is a highly consequential yet invisible issue. Pakistan has one of the highest mental illness rates in the world — A 2016 article by DAWN says around 50 million Pakistanis suffer from mental issues. Pakistan also has a staggeringly low number of psychiatrists — a 2020 article published by The Lancet Psychiatry says Pakistan’s population stands at more than 200 million people yet the nation has fewer than 500 psychiatrists. A 2015 article by Inamullah Ansari says Pakistan has four psychiatric hospitals available to the whole country. This makes it especially hard for those who need help to find it, a problem only exacerbated in rural areas where there is only one psychiatrist per million people. For these reasons, improving mental health in Pakistan is imperative.

It is common for many Pakistani families to celebrate the birth of a boy but mourn the birth of a girl. Child brides, dowries and exchange marriages are common, especially in rural areas. And often, early marriage results in abuse, violence, and in extreme circumstances, some marriages lead to honor killings and acid burns. Marital violence is concerningly common in Pakistan. A United Nations study found that a staggering 90% of Pakistani women surveyed suffered mental and verbal abuse from their spouses and 50% of women endured physical abuse.

Divorce in Pakistan also carries a tremendous stigma. Many women are afraid to leave their husbands simply due to social stigma, fearing their friends and families will cut them off. This stigma often traps women in a cycle of abuse. Around 70% of abused women have never opened up to anyone about their abuse, says a 2004 study by Unaiza Niaz.

Several studies and surveys have shown that women, especially married women who have faced violence, are exponentially more likely to seek psychiatric care than men. Due to the gender-specific issues Pakistani women endure, promoting mental health in Pakistan, especially for women, is imperative.

Although the situation seems grim, many organizations and individuals are fighting to bring awareness and increase psychiatric care for those who need it the most.

Dr. Alaptagin Khan is working to raise awareness of mental health in Pakistan and established the Childhood Trauma Research Center in Peshawar in 2018 at Lady Reading Hospital, with the support of the Neurocare Foundation. This center collects data, hosts workshops and seminars and works to bring awareness to childhood trauma. The center aimed to collect data from 2,500 participants by December 2020. The data “will allow health professionals to assess the true disease burden of mental health disorders associated with childhood trauma in Pakistan.”

BasicNeeds Pakistan, started in 2011, is a nonprofit organization that “works to improve the lives of people living with mental illness and/or epilepsy in Pakistan.” It provides mental health training for community volunteers, brings awareness to mental illnesses and common symptoms and debunks myths or stigma. In addition, in 2016, it started the Centre for Women’s Enterprise and Development, which aims to create job opportunities for women suffering from mental illnesses. As of 2016, BasicNeeds Pakistan has provided support to 16,703 people who faced mental health issues or knew someone who did.

Mental health in Pakistan is a dire issue, one that political turmoil and instability continue to perpetuate. It is also one that women are at the forefront of, contributing to the oppressive standards of women’s living. It is an epidemic that continues to grow, affecting the entire population’s well-being and must be addressed for Pakistan to improve as a country.