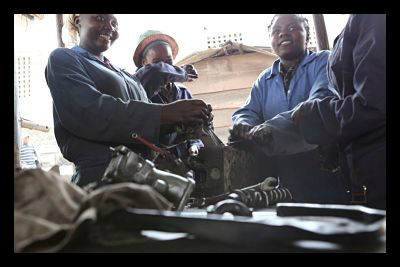 In a nation where rape is rampant and commonplace, women are taking matters into their own hands. Sporting blue jumpsuits and grease stained hands, women of the city of Goma are asserting their independence as female mechanics in the Congo.

A 2011 study from the American Journal of Public Health found that about 48 women are raped every hour in the DRC. The incidence of sexual abuse is pervasive in Congolese society, as it is implicitly condoned in the domestic sphere. Husbands have unyielding authority over their wives; women still need their husband’s permission to start a business or open a bank account. Matters are even more severe in the city of Goma, which has been given the title “ the rape capital of the world.”

However, this has not discouraged women in Goma. In fact, it has empowered them. Despite social censure and criticism, they are entering the workforce as mechanics, a position traditionally reserved for men. Natural disaster coupled with routine insurgent outbreaks has left the infrastructure of the city dilapidated and downtrodden. The demand for mechanics is therefore high.

The girls claim that as mechanics, prospects are more promising. When they arrive to the auto body yard they are simply expected to perform their tasks. They are not subject to discrimination or scrutiny; they are treated just like everybody else. This for them is a type of independence that they have never experienced. And it’s certainly uprooted traditional, patriarchal norms.

Two young female mechanics in the Congo, Kubuya Mushingano and Dorcas Lukonge, have been practicing at an auto body yard for about four months now, after a year of training at ETN, or Equipe d’Education et d’Encadrement des Traumatses de Nyiragongo. ETN in conjunction with CARE International, has been functioning as a vocational training program since 2013, pulling street kids, young mothers, sexual abuse survivors and former soldiers throughout Goma.

These apprentices are given the choice of seven different sectors of training. Though in the Congo females make up half of the labor force typically as seamstresses, cooks or farm laborers, trainers of ETN encourage females to pursue unconventional vocations. For Mushingano and Lukonge (and many others), this was mechanics. When their fellowships at the auto body yard ends, ETN will give them a mechanic’s kit to start their own business or join a current one and become self-sufficient.

Jeane, a female mechanic trainee at ETN, was a victim of sexual violence herself. She said that the skills she has learned and acquired as a mechanic have given her a new sense of autonomy. Like many acts of social defiance, female mechanics in the DRC are quiet, yet powerful. Their subtle defiance is in some ways making a loud statement.