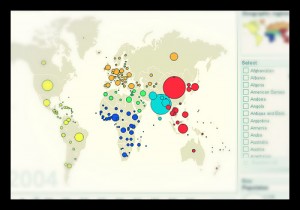 Since stepping down from his leadership role at Microsoft in 2008, Bill Gates has been writing an annual public letter on global issues as well as the work of the Bill & Melinda Gates Foundation. In the 2013 letter, Gates focuses on the issue of measuring development. Measuring progress would allow for a coherent assessment of the effectiveness of the efforts.

Gates’ letter proposes that philanthropy and government programs have to turn towards the business model example. This model emphasizes a clear evaluation of profit in order to measure their rate of progress towards their goals. Gates refers to the quantification of the decrease in child mortality rates in Ethiopia as an example of setting an explicit and measurable goal.

Along with Gates’ letter, Hans Rosling, Swedish academic and developer of the Trendalyzer, produced a video for the release of the letter. In the video, Rosling discusses why the world can no longer be simply divided into two poles of developed countries and developing countries.

Rosling’s study of the number of children per family and mortality rates explains the rapid development that has occurred in the world within the past 50 years. According to this model, a large number of developing countries have moved into the section of the developed countries.

By measuring these global trends, we can better understand the development of the world.