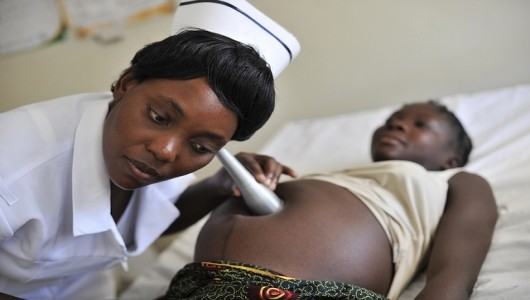 The United Nations Children’s Fund (UNICEF) recently announced its partnership with the Korean International Cooperation Agency (KOICA) to support a public health program in Uganda targeting child and maternal health. The much-needed project calls attention to the poor state of public health in Uganda for women and children, as well as the viability of South Korea as an international health aid donor.

Uganda’s UNICEF representative Aida Girma notes that while Uganda’s healthcare system is sound, a chronic lack of resources contributes to spotty coverage, especially in the rural Karamoja and Acholi regions in the north of the country. She hopes that this new program “will solve some of those challenges and that the number of women dying while giving birth and children who die before they are five will reduce especially in [the] Karamoja region.”

In a country where almost 90 percent of the population lives in the countryside, health services tend to be spread thinly. In 2010, public spending accounted for only 15 percent of total health spending, while spending from international aid was almost twice that. Thus, the burden of paying for health care tends to fall squarely on the shoulders of Ugandan citizens who must suffer through high out-of-pocket expenses if they want to enjoy adequate coverage. A 2014 World Health Organization report on the country said that to achieve good coverage, “efficiency in resource allocation and utilization, especially of donor funds needs to be improved.”

The partnership is worth about $8.5 million dollars and is expected to reach about 200,000 women and infants. Janet Museveni, Ugandan Minister of Karamoja Affairs, notes that there are geographic disparities in maternal and neonatal health, and the partnership should help smooth those out. Uganda’s national rate of maternal mortality estimates to be about .44 percent, while Karamoja and Acholi have mortality rates of .75 percent and .56 percent, respectively. Malnutrition is also a significant contributor to under-five child mortality in those regions.

This particular public health project is a small indication of Korea’s transformation from aid recipient to aid donor. From 1945 until the mid-90s, Korea received almost $13 billion in aid, mostly from the U.S. Over several decades, the country went from receiving international aid grants, to loans, to project-based loans, finally graduating from World Bank lending list in 1995.

Today, Korea is an economic powerhouse and is coming into its own as an international aid contributor. In 2010 it became the only former international aid recipient to join the OECD Development Assistance Committee, an elite group of nations that contribute the most foreign aid.

In 2014, then Prime Minister Jung Hong-won pledged two billion dollars in official development assistance, which was an 11 percent increase from the previous year. By the end of 2015, the country hopes to set aside .25 percent of its budget for foreign aid. In comparison, the U.S. typically donates about .2 percent of its budget.

This partnership with UNICEF also displays Korea’s willingness to use innovative financing to achieve their aid goals. In 2007, the Korean government started levying a fee of $1 for outbound flights from the country. The revenue from this levy was set aside for Korea’s “Innovative Maternal and Child Health Initiative Fund.” Portions of this fund went to supporting health projects in Uganda such as the UNICEF partnership, which will be implemented through the Ugandan government as well as non-governmental organizations.

In the long run, Uganda will ideally be able to take a country-led approach to developing its health care sector. Donor funds probably don’t represent the best long-term solution to a lack of medical resources and Uganda will have to increase its spending on medical training and infrastructure in order to reach its most remote citizens. However, partnerships between international donors like Korea and UNICEF can help stimulate an expansion of health care coverage while strengthening Uganda’s governance over public health issues.