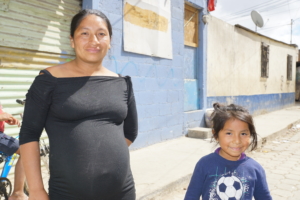 As of 2015, the maternal mortality rate in Guatemala was 88, and three-quarters of these maternal deaths occurred in women of indigenous ancestry. The maternal mortality rate among indigenous women is thought to be more than 200. Since midwives or comadronas primarily care for pregnant indigenous women in Guatemala, investments from the World Bank and UNFPA have been focused on training midwives and connecting them with hospital services when necessary. More than six million indigenous people inhabit Guatemala and comprise a large portion–estimated at 45 to 60 percent–of the population. Further, 21.8 percent of the indigenous population live in extreme poverty compared to only 7.4 percent of the non-indigenous population.

In 2006, UNFPA, a U.N. agency focused on sexual and reproductive health, began to offer obstetrical emergency training to local comadronas and family planning methods. The agency also teaches the importance of a skilled attendant being present during births in order to improve the maternal mortality rate in Guatemala. Estimates suggest that a well-trained midwifery service “could avert roughly two-thirds of all maternal and newborn deaths.” Statistics show that from 2009 to 2016, UNFPA has trained more than 35,000 midwives.

The Department of Sololá in the western highlands of Guatemala is home to more than 300,000 people, most of whom are indigenous Maya. Only one in four rural births occurs in a hospital, compared with over two-thirds of urban births. In Sololá, comadronas attend more than 63 percent of births mainly outside of a hospital. Some estimates put this figure at more than 90 percent.

The Improving Maternal and Neo-Natal Health Initiative has a three-pronged approach and funding from the World Bank’s Youth Innovation Fund in 2017. The initiative has established a visually-based curriculum to help comadronas recognize dangers and risks during delivery, two-week long training workshops conducted in local healthcare posts, and endowment of “safe birthing kits” for all comadronas containing tools such as latex gloves and gauze pads. Unlike previous initiatives, these trainings have been conducted in local languages rather than solely Spanish. Rosa, a comadrona in the city of Santiago, said this simple change made her “feel more respected” and gave her an increased desire to participate because she felt empowered to save “more lives in her community.”

In collaboration with the Ministry of Public Health and the government of Guatemala, the Maternal Child Survival Program (MCSP), an international program with national and subnational branches, implemented a Midwifery Training Program in February 2018 to improve the maternal mortality rate in Guatemala. Their model uses a competency-based skills training approach. Working with the University of San Martin Porres, MCSP established a coursework protocol for certification.