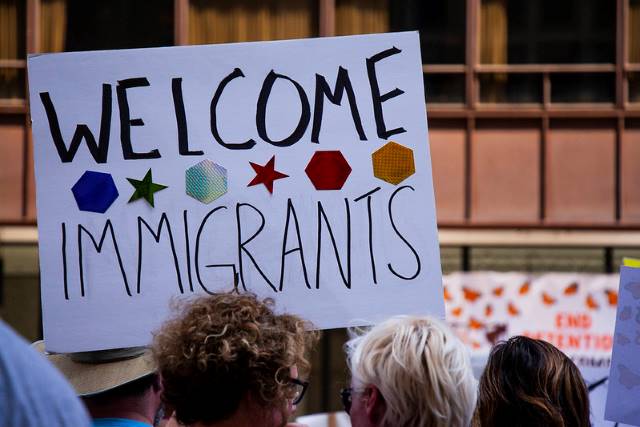 Not until 2019, under the Trump administration’s Migrant Protection Protocols program (MMP), has a refugee camp existed on a United States border. After two years of operation, on February 24, 2021, the Matamoros refugee camp closed and the U.N. Refugee Agency began its in-person registration of the 750 people who lived there. The MPP policy forced people seeking asylum in the U.S. to remain in Mexico until their cases could be heard in U.S. immigration court.

The influx of immigrants to the U.S. border can be attributed to root causes of “economic problems, ongoing violence, worsening corruption, challenges to democracy as well as the devastating impact of the coronavirus.” In 2017, the majority of immigrants from Central America were from El Salvador (39.7%), Guatemala (27.2%) and Honduras (18.6%).

An asylum seeker is defined as “a person who has left their country and is seeking protection from persecution and serious human rights violations in another country.” Since the implementation of the MPP, roughly 70,000 people made the difficult choice to leave their country of origin to seek asylum in the U.S. and about 70,000 were returned to Mexico. A refugee camp thus formed in Matamoros, Mexico, located on the southern bank of Rio Grande, directly across the border from Brownsville, Texas. At this camp, hundreds, and at times, thousands of people wait for the duration of their immigration proceedings.

The conditions of living at the camp posed serious health risks. Furthermore, as of December 2020, there were more than 1,000 reports of “rape, kidnapping, torture and other violent attacks” against asylum seekers at the U.S. border. In addition to the risks posed at dangerous border towns, the camp faced deteriorating conditions, including a lack of access to water and sanitation. In juxtaposition to the peril faced in a crowded refugee camp, there were celebrations within the community of residents. People formed church groups and tent schools. They celebrated quinceaneras and fell in love. The refugees at the Matamoros camp showed resolve to find some level of normalcy within a period of uncertainty and fear.

Resource Center Matamoros (RCM) is a humanitarian organization that has become a staple of social support for immigrants at the border. Gaby Zavana, the organization’s co-founder, told The Borgen Project that there were no medical resources and no infrastructure in the early days of the camp.”We initially provided food, tents and blankets, but that shifted to providing an office building for the refugees to have access to legal teams, medical teams and social support services.” The work that Zavana does within the RCM is multi-faceted. She explained that as the organization expanded, RCM started to take on the role of camp management.

Zavana says that RCM prioritized public health issues by setting up temporary camp showers so that people would not have to bathe in the river. Additionally, RCM targeted camp infrastructure, paving walkways and helping people construct better home structures and kitchens. The work of RCM extends to lobbying the Mexican and U.S. government and advocating on behalf of the asylum seekers at the U.S. border.

Angry Tias and Abuelas, the recipient of the Robert F. Kennedy Human Rights Award in 2019, is an organization based in the Rio Grande Valley, Texas. The organization has engaged in efforts to provide food to the hungry, visit the imprisoned and comfort people stranded at the border. It also set up stores in the Matamoros camp to supply essential items like diapers and cooking utensils to the migrants, free of charge.

The Biden administration announced in late February 2021 its plans to close the Matamoros refugee camp, terminate the MPP and dedicate $4 billion to address the underlying causes of migration from Central America. The administration has started processing migrants and all of the residents of the camp have now moved to await their hearings in the U.S. When asked about the environment of the camp upon hearing the news of its impending closure, Zavana told The Borgen Project that the residents were unusually quiet. The quietness could signify a deep, silent reflection of their experiences at the camp and futures in the United States.

The number of people coming to the border has increased dramatically since the termination of the MPP. Zavana says that “a big portion of RCM’s work has gone to the camp so the closure of the camp can free up resources to focus on new arrivals.” RCM is currently working on an interim shelter to house new arrivals until more shelter facilities open up.

The tides are shifting for asylum seekers at the U.S. border. The Matamoros refugee camp provided some level of security for thousands of people fleeing persecution, violence and poverty in hopes of receiving asylum in the United States. The efforts of organizations like the Resource Center Matamoros allowed camp residents to live with more dignity and humanity. The Biden administration’s upheaval of Trump-era immigration policy is promising for the past residents of the Matamoros refugee camp.