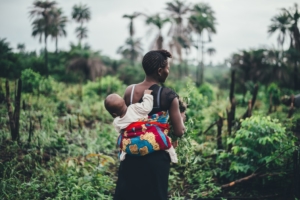 The Every Second Matters Uterine Balloon Tamponade (ESM-UBT), a device designed by Massachusetts General Hospital (MGH) to stop postpartum hemorrhaging (PPH), is a condom that is attached to a Foley catheter. When a mother experiences profuse bleeding which cannot be stopped through other means, the condom is placed within the uterine cavity and filled with water using a syringe and a one-way valve. Within minutes, the bleeding is expected to stop. This device has been effective in preventing fatalities associated with pregnancy and childbirth.

The device is easy to use and requires minimal training. Since the training of more than 850 South Sudanese health workers in 2010 and 2011, MGH began using and researching the usage of the device in the countries of India, South Sudan, Kenya, Sierra Leone, Ghana, Senegal, Tanzania, Zambia, Peru, Honduras, Uganda and Nepal.

Training of 46 health providers from 12 health centers to use the device began in Kenya in August 2012. During the first year after training, twenty-six ESM-UBTs were used. The patients who required the device were either unconscious or in an unstable mental state as a result of the severe bleeding they were experiencing. In each case, once the device was put into place, the bleeding was stopped, and the patients were saved. As a result of these successful interventions, the Kenyan Ministry of Health has formally integrated the program into the national policy for PPH.

A study was published in 2013 that predicted how many lives could potentially be saved by the use of a uterine balloon tamponade in the year 2018.  These predictions were made based on the availability, use, and efficiency of technologies in health care centers that provide maternal and neonatal services. The model estimated that when the use of a uterine balloon tamponade is implemented, 6,547 lives can be saved, which is an eleven percent decrease in maternal deaths, 10,823 surgeries can be prevented and 634 severe anemia cases can be avoided in sub-Saharan Africa every year.

In 2018, there was a case that involved complex vaginal lacerations which may have resulted in death, but the ESM-UBT was used to control the bleeding. The 26-year-old woman, who was 39 weeks pregnant, went to the Muhimbili National Referral Hospital in Tanzania to deliver her baby. Although she was in good health, she began experiencing significant blood loss. After uterine massage, administration of oxytocin and removal of the placenta, the patient was still bleeding and became unconscious.

Upon examining her pelvis, doctors discovered second degree bilateral vaginal sulcal lacerations. They attempted to suture the lacerations, but the bleeding persisted, so they decided to insert an ESM-UBT device, which was inflated with 300 cc of water. Finally, the bleeding stopped. After forty-eight hours, the device was removed, with no more need for repair. The mother left the hospital two days after giving birth and had fully recovered by her six-week postpartum visit.

As of now, over 670 ESM-UBT devices have been used. MGH has plans of distributing these devices to 350 health centers in South Sudan and Kenya. In addition, technology has been developed to allow for the tracking of referrals of this device as well as the results of its use. The ESM-UBT device has great potential to reduce the number of maternal deaths in developing nations.