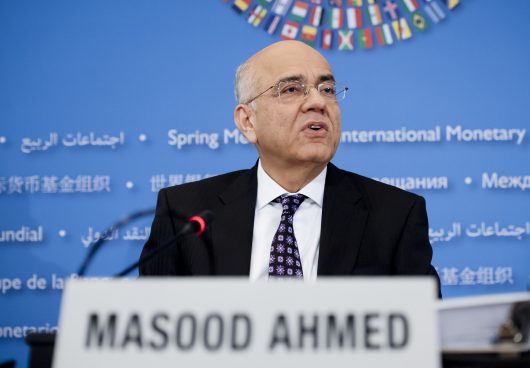 Representatives confirmed on Sept. 6, 2016, that Masood Ahmed would begin serving as the new Center for Global Development (CGD) president in early 2017. Current President Nancy Birdstall announced the end of her 15-year tenure with the organization last November. Now that the CGD has found an equally accomplished replacement, she is thrilled to welcome a leader of Ahmed’s caliber to the team.

The CGD works to change practice and policy in wealthy nations in a way that alleviates global poverty. Per the organization’s website, “We are a policy crucible where world-class scholars use independent, rigorous research to develop new knowledge and practical solutions.”

Because the organization has a proven track record of influencing developmental policy worldwide, finding a new CGD president with global reach was paramount. After conducting an intensive search, the selection committee chose Ahmed for his impressive record of service for the world’s poor.

Here are five facts about Masood Ahmed’s career that will position him for success as the new CGD president:

Over the course of a brilliant career, the new CGD president has helped create meaningful, sustainable change in the developing world by working with some of the most influential agencies on Earth. The upward mobility of his career is indicative of a mind people trust and a voice those working for the world’s poor want to hear.

“CGD occupies a prime position in the development, policy and research worlds; in my career these have also been my worlds,” Ahmed said. While serving as the new CGD president, Ahmed will flex strategic muscles built by a lifetime of outstanding global service.