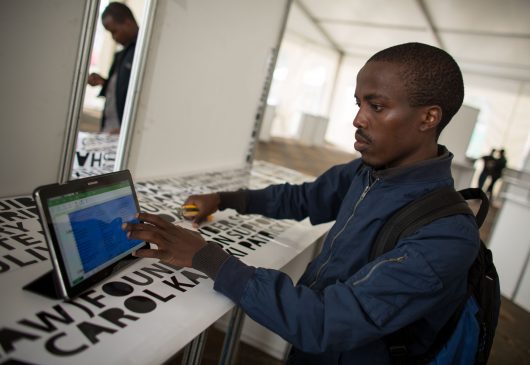 Researchers from MIT, Tufts and Georgia State University are conducted a study to determine whether tablet computers that have with literacy applications can improve global literacy rates among children living in extremely poor communities.

As part of the first phase of the study, tablets were sent to a pair of Ethiopian villages with no schools or written culture, a suburban South African school with a student-to-teacher teacher ratio of 60 to 1 and a rural school in the U.S. with mostly low-income students.

The tablets contained specially designed apps to help illiterate children ages four to 11 learn letters, sounds and reading fundamentals. The children in Ethiopia had never seen electricity or paper before this study.

Maryanne Wolf, founder and director of Tuft’s Center for Reading and Language Research, visited Ethiopia in 2013 and saw how excited the children were to use the tablets.

“The children learned to be facile so quickly—it was breathtaking,” Wolf said, according to a Tufts Now article.

In the African deployments, students who used the tablets scored much higher than those who did not. The American students also improved their scores dramatically after using the tablets for just four months.

“The whole premise of our project is to harness the best science and innovation to bring education to the world’s most under-resourced children,” associate professor of media arts and sciences at MIT Cynthia Breazeal said, reports an MIT News article.

The main theme of this project is that it is self-starting. The research team purposely did not tell the children what to do with the tablets because if the project expands, they will not be able to bring in coaches to teach the children how to use the apps.

Within minutes of receiving the tablet, one Ethiopian boy figured out how to turn it on. Within a week, the Ethiopian children had the apps up and running.

The research team is currently analyzing the data collected from the trials. They have also created a nonprofit organization called Curious Learning, which is now looking for partners to help launch larger pilot programs in an effort to improve global literacy rates.