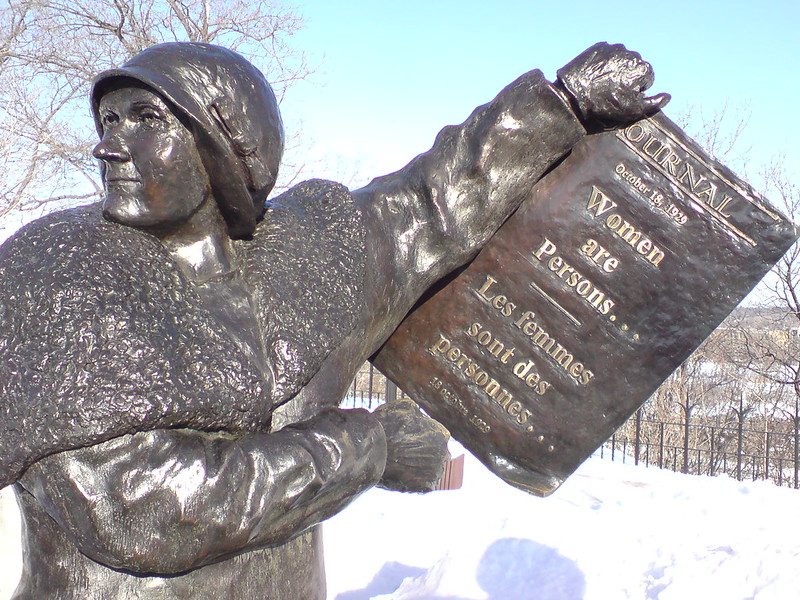 In 1884, Ontario became the first Canadian province to grant women the same legal rights as men through the Married Women’s Property Act. In 1900, Manitoba became the second province to recognize the act. While this proved to be a turning point for women’s rights in Canada, a great deal of work remained.

In 1928, five women, Henrietta Muir Edwards, Nellie McClung, Louise McKinney, Emily Murphy and Irene Parlby, petitioned the Canadian government to have the Supreme Court decide whether the British North America Act recognized women as “persons.” The court initially ruled that women were not considered “persons” under the act, but in 1929 it reversed its ruling. While this was a huge advancement of women’s rights in Canada, it was advantageous mainly for white women. It wasn’t until 1960 that women belonging to minority groups received full legal rights, including the right to vote.

Through the years, the Canadian government has striven to promote gender equality across the country. However, plenty of work remains. In 2015, a U.N. Human Rights Report raised concerns about Canada’s economic inequality and in particular cited “persisting inequalities between women and men.” Similarly, in 2016, a study by the Organisation for Economic Co-operation and Development (OECD) ranked Canada as having the eighth-highest gender pay gap out of 43 surveyed countries.

Women make up an estimated 50% of Canada’s population, and representatives should reflect their constituents. Following the 1929 clarification of “persons” in the British North America Act, women eventually began holding elected office. However, decades passed before women of color received the same legal rights as white women. Even today, the Canadian government struggles with a lack of diversity.

Fortunately, Prime Minister Justin Trudeau has made it his goal to change this trend. In July 2021, Trudeau appointed Mary Simon, Canada’s first Indigenous governor general. Her appointment marks a major milestone for Canada as the country continues to grapple with past and current discriminatory practices against Indigenous communities.

Women in the Workforce during COVID-19

As the world continues to feel the effects of the COVID-19 pandemic, many Canadians remain unemployed, and women have experienced higher rates of job loss than men. According to the Royal Bank of Canada (RBC), almost half a million women who lost their jobs during the pandemic have been unable to return to the workforce as of January 2021. Among those most impacted were women of color, immigrants, young professionals and new mothers. The pandemic forced many companies to downsize, and experts warn that these changes could permanently and disproportionately impact women.

Despite lingering uncertainties, Prime Minister Trudeau still believes the country can “smash one of the defining inequalities of our time.” Recently, Canada has pledged $100 million to address inequalities in both unpaid and paid care work internationally, as well as $80 million to support feminist movements and organizations around the world.

In July, Canada also announced the creation of the Pay Equity Act, which will go into effect on August 31, 2021. The new law will promote gender equality and help close the gender wage gap. It will also apply to parliamentary workplaces. Under the Pay Equity Act, employers will inform their employees of an upcoming new pay equity plan by November 1, 2021, create a pay equity committee and then share their pay equity plan with employees by September 1, 2024.

Canada’s ability to acknowledge its flaws will open new opportunities for the country to end gender inequality. The government’s commitment to advancing women’s rights in Canada and around the world will bring about needed change and serve as a blueprint for other countries hoping to improve women’s rights.