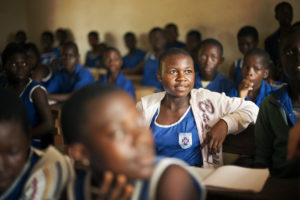 Saint Marcellin Champagnat formed the Institute of the Marist Brothers in 1817 with the mission of helping poor and marginalized children around the world. The community of Marist Brothers has now grown to include almost 3,000 members. In 2007, in the spirit of Champagnat’s vision, the Congregation of the Marist Brothers of the Schools established the Marist International Solidarity Foundation (FMSI) in Rome. Its mission is to provide quality care and education for all children. Today, the foundation directly improves the lives of more than 650,000 youth around the world. It does so through its presence in educational, social and youth centers. Three of FMSI’s important mission projects are in Ghana, Haiti and Lebanon.

With a fast-growing youth population, experts claim that Ghana has a unique opportunity to utilize its “demographic dividend” as a positive force for its society and economy. Without a strong educational system, however, the growing demographic could exacerbate the country’s poverty. Problems in the Ghanaian educational system, especially in rural settings, include shortages of qualified teachers, adequate teaching spaces and school materials. Additionally, literacy and learning standards are low. Educational institutions struggle to provide quality, inclusive teaching across gender and socioeconomic disparities. Thousands of children drop out of school because their families cannot afford the economic burden.

Fortunately, the Marist Brothers have been quietly contributing to the betterment of Ghanaian education. In 1998, the Marist Junior High School emerged in Sabin-Akrofrom. In this rural area, families cannot afford the transportation costs to send their children to city schools. Since its establishment, the Marist Junior High School has taught more than a thousand students who would have not received schooling otherwise. Its students meet high academic standards, and the facility is now prominent for its effective, inclusive and quality education for children living in remote areas of Ghana.

In Haiti, thousands of children do not receive an adequate education because families cannot afford to make such financial sacrifices. Because of this, child labor is widespread in Haiti. As of 2019, more than 34% of children between the age of five and 14 were in the labor force. Child labor drastically reduces children’s opportunities to go to school. The government is unable to enforce a minimum age requirement for its workers or prohibit the use of children for dangerous work. Children left at orphanages also often work in hard domestic work.

The Marist Brothers have taken action to advocate for child rights and reduce child labor in the region of Latiboliere. The mission of the Collège Alexandre Dumas secondary school is to improve the lives of children who are vulnerable to exploitation. After successful negotiations with children’s families, the Marist Brothers are now able to host 100 boys and girls per year. In addition to providing basic schooling, this program offers nutritional meals, medical care, and recreational activities like sports and arts. These activities contribute to the Haitian children’s academic, emotional and social advancements. Overall, the school reduces the labor exploitation of minors by educating their families on the importance of schooling.

Lebanon also faces the issue of widespread child labor, which impedes youth access to school. Immigrant children, whose parents experience exclusion from the Lebanese labor market, are especially vulnerable to labor trafficking. They can receive less pay and employers do not require identification papers. However, Lebanese families living in the poorest areas of the country face similar problems to those of immigrant families. Thus, Lebanese child labor is also on the rise. This cycle forces children to become the only source of income for many poor families who cannot afford to lose their support by sending them to school. Consequently, even the children enrolled in an educational institution have poor levels of attendance when due to seasonal labor.

The Marist Brothers’ school, Les Frères, has been helping children in Lebanon since before the Lebanese civil war. Now, in cooperation with the La Salle Brothers, the Marist brothers in Lebanon have introduced a new educational project called Fratelli. The Fratelli project supports hundreds of Lebanese and refugee children who have fallen behind in school. It incorporates socio-academic and vocational training to help them reintegrate into the Lebanese education system. FMSI provides funds to buy school materials, pay activity costs and finance the enlargement of buildings to make Les Frères accessible to more children.