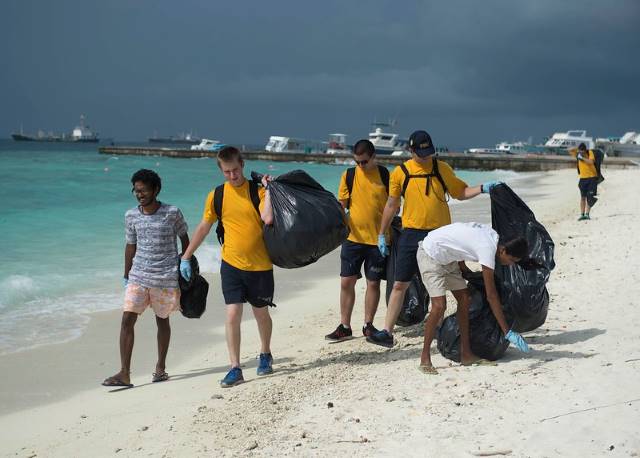 Seven years ago, The Ocean Cleanup organization launched as a Dutch nonprofit dedicated to eliminating the Great Pacific Garbage Patch using autonomous, solar-powered cleaning systems. Now, as part of a new initiative, the organization is rolling out barges in major rivers as an upstream solution to global, prolific marine debris.

At least eight tons of marine plastic enter the oceans each year, where a majority floats on the surface before breaking down into non-biodegradable microplastics. Around 80% of marine debris flows through rivers before reaching the ocean. Because a handful of countries are responsible for a majority of marine debris, cleaning just 10 major polluting rivers of waste would stop a significant amount of debris from ever reaching the ocean.

Based in the Netherlands and led by a 26-year-old entrepreneur, Boyan Slat, The Ocean Cleanup organization has plans that include fitting the world’s 1,000 most polluting rivers with waste removal systems over the next five years. The organization’s research indicates that 1,000 specific rivers are responsible for 80% of the pollution.

Solar powers the waste removal systems, and they are scalable and largely autonomous. Each one uses barriers to direct waste along the river to a floating “interceptor” barge, which loads waste with a conveyor belt into containers that local municipalities can then dispose of. Individual interceptors can collect 50,000 kilograms of waste each day, though “in optimal conditions up to double this amount can be achieved.”

The interceptor concept, designed in 2015, was first utilized in the Cengkareng Drain, Indonesia, where it has remained. The Ocean Cleanup has since partnered with local governments to deploy three more interceptors in Malaysia, Jamaica and the Dominican Republic. By placing each one downstream from the last major source point in a river, they manage to fill all containers every few days, though they sometimes fill up in only a few hours.

Marine plastics’ widespread and harmful effects on marine life are well-documented, with hundreds of species ingesting, suffocating and entangling themselves in plastics. The global impact of aquatic microplastics, by contrast, is an emerging field of study. Appearing in tap water, beer and salt, they have appeared in water samples taken from every ocean. In 2019, the World Health Organization called for more research into microplastics and a drastic reduction in plastic pollution.

An environmental health report published in 2018 stressed the risk of consuming microplastics in seafood. “Because microplastics are associated with chemicals from manufacturing that sorb from the surrounding environment,” the report finds, “there is concern regarding physical and chemical toxicity.”

The Ocean Cleanup found that marine plastic is responsible for between $6 billion and $19 billion of economic costs annually. These costs “stem from its impact on tourism, fisheries and aquaculture, and (governmental) cleanups,” and do not even account for the disability-adjusted life years (DALYs) lost because of its public health impact.

Hopes for the Future

The Ocean Cleanup organization hopes to significantly reduce plastic pollution in oceans. Once fully implemented, the waste removal systems aim to reduce the Great Pacific Garbage Patch by 50% every five years. The organization’s latest endeavor is a line of sunglasses made from plastic removed from the Great Pacific Garbage Patch. With all proceeds going toward expanding cleanup efforts, this is the most stylish way an ordinary person can contribute to a greater cause.

Lying about a thousand miles off the coast of California is a vast collection of marine debris, called the Great Pacific Garbage Patch. This problematic heap of floating artificial waste is continually exacerbated by photodegradation, the process by which the sun corrodes plastic into smaller units of the same material. These smaller pieces make the trash pool much more difficult to collect and contaminate marine animals’ food supply.

Fish, sea turtles and birds are consuming these small pieces of plastic in massive numbers. Since plastic is known to absorb toxins from the oceans, scientists have attributed the decline of numerous species’ populations to these tiny, poisonous particles. BBC reported that “about one-third of all albatross chicks die on Midway, many as the result of being mistakenly fed plastic by their parents.”

Yet, animal rights activists are not the only groups that should be incensed by the Great Pacific Garbage Patch. Boating and submarine equipment has been reportedly damaged by run-ins with this Texas-sized reservoir of trash. In addition, lovers of seafood are now exposed to the harmful toxins harbored by fish caught near the area, as the polluted region is a common stop for commercial fisherman. Finally, currents are transporting the trash from the gyre to the once pristine beaches of Hawaii, burying vacation destinations in multiple feet of plastic.

Any large-scale cleanup effort appears to be difficult to attain at any reasonable cost. The most basic method would involve using gigantic nets to collect the trash and convert it into oil. However, such an ill-fated strategy would inadvertently catch and kill an unreasonable number of commercial fish, turtles, sharks and other vital members of the marine animal kingdom.

However, 19-year-old Boyan Slat has provided some hope for the future. He proposed an innovated technique that has been endorsed by marine biologists and engineers alike. Slat believes that a collection of floating buoys and platforms on the ocean’s surface can separate the waste without capturing innocent wildlife. Learn more about the project at Boyan Slat’s website.

Although Slat’s project is years away from any potential implementation, it would be in the best interest of both man and animal if this theory can successfully be put into practice.