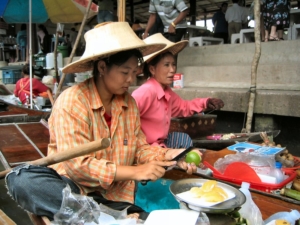 Thailand has long been waging a brutal war against drug traffickers in the country. The crackdown came as a response to the rampant consumption of illegal drugs that began in the early 2000s in Southeast Asia. From incarcerating mere suspects to firing squad executions, the Thai government has not been lenient with outlaws, sometimes even bordering on human rights violations. This is why it comes as a surprise that on June 9, Thailand became the first Asian country to decriminalize the use and possession of marijuana and hemp, four years after it legalized the usage of cannabis for medical purposes. However, this law comes with a few caveats. One of the caveats is that smoking marijuana in public for recreational purposes is still illegal and can lead to a “potential three-month sentence and 25,000 Thai baht ($780) fine.” Another is limiting the quantity of THC (the compound that makes consumers hallucinogenic) to 0.2% in cannabis products. The restrictions persist to ensure regulation. For the most part, the focus is being shifted from an anti-drug agenda to harnessing Thailand’s marijuana market for beneficial purposes.

The New Marijuana Market is Full of Economic Potential

Thailand is still largely an agrarian economy, with almost a third of the labor force employed in this sector. The law that allows the commercial sale of marijuana, comes as a big relief for farmers, who were in desperate need of cultivating a cash crop other than sugar and rice. This need is amplified by the fact that the economy has been in slumber ever since the pandemic struck, growing only about 1.6% in 2021.

The policy aims to help farmers get back on their feet and maintain a steady source of income. To encourage cultivation, the government handed out 1 million new cannabis seeds to households, free of charge. Leveraging Thailand’s ideal tropical climate for the growth of marijuana, Health Minister Anutin Charnvirakul estimated “the value of [the cannabis] industry to easily exceed $2 billion.”

To ensure a proper production and distribution system, the Food and Drug Administration has instructed all marijuana cultivators to register on an app called PlookGanja. According to the Bangkok Post, more than 100,000 people had registered and “the app was downloaded more than 50,000 times” on the morning of June 9 itself. A problem that can plausibly crop up when there are so many sellers is ensuring that the quality of marijuana is high and no product falls under the category of narcotics. Nevertheless, creating an orderly system helps the government keep track of illegal vendors and protect licensed businesses.

Products and Businesses based on the Marijuana Market

Around 1,181 marijuana-containing products, ranging from food and drinks to cosmetics and medicines, have been approved by The Health Ministry and are already out in Thailand’s markets. According to Reuters, the ministry expects the industry to be worth 15 billion baht ($435.16 million) by 2026. Thailand’s marijuana market possesses enormous potential and businesses like “Agro-industrial conglomerate Charoen Pokphand Foods Pcl (CPF.BK) and energy firm Gunkul Engineering (GUNKUL.BK)” are collaborating to produce cannabis-infused food and drinks for consumers.

The new business potentials are drawing in investments of more than 1.2 billion baht ($35 million), making the marijuana market very lucrative and a smart place for people to cash their money in.

Cannabis tours in Thailand are expected to garner a lot of attention from tourists. Thailand has always been known as a prime wellness destination and the legalization of marijuana will help to build on this image. Many cafés, roadside stalls, restaurants and spas are selling juices, curries, popcorn, ice creams, soaps and oils infused with marijuana or cannabidiol (a safe compound found in cannabis) to help people de-stress. The sellers especially target international workers who come on corporate trips from countries where marijuana consumption is still not fully legal.

Ganja Café owner Thanyapat believes that the new law offers an “opportunity to offer new products and see a niche market expand to a mass market.” On the other hand, the Thailand government stresses that no foreigner should visit the country under the mentality of being able to smoke freely on the streets. The emphasis is on creating a healing environment, not an addictive one.

Apart from relaxation, another dimension of the cannabis tours is medical care. Marijuana is known for its pain-relieving medicinal properties and is more affordable than chemical drugs. The new law is paving the way for the establishment of hospitals, clinics and wellness centers that employ certified cannabis doctors and focus on cannabis treatment. This implies a huge expansion of Thailand’s marijuana market.

Educational Cannabis Tours and The Next Phase

It will take time to build the infrastructure and combat the stigma associated with marijuana. However, Thailand conducted pilot projects on “educational cannabis tours” a few years prior and these tours saw significant success. The tours came about through a partnership between Than Global Travels and Rajamangala University of Technology Isan, Sakon Nakhon Campus, and attracted people of all ages and occupations.

Than Global Travel Executive Officer Kattikamas Thanyajaroen states that “the next phase of cannabis tours will focus on medical care for people who want to use cannabis at clinics or universities for treatment.”

Thailand’s marijuana market may be the stimulus the economy needs to start growing rapidly. With proper precautions in place, the legalization of marijuana could indeed be a profitable venture for all citizens.