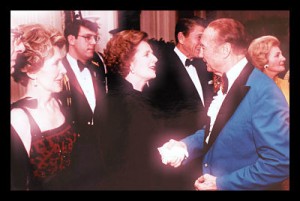 Margaret Thatcher, Britain’s first female Prime Minister, died of a stroke on Monday, April 8 at the age of 87. Her accomplishments and failures are numerous but her humble beginnings in the apartment above her father’s shop did not stop her from climbing the political ladder and making a name for herself. With over a decade in Parliament, a friendship with Ronald Reagan, and great debate regarding her sensitivity, or lack thereof, to the social impact of the economic reforms she led, under her belt, “Maggie” certainly left an impression on the World. Criticism and praise aside, these quotes from Thacher’s book, Statecraft: Strategies for a Changing World (2003) on leadership, poverty and peace evoke discussion.

“It is always important in matters of high politics to know what you do not know. Those who think that they know, but are mistaken, and act upon their mistakes, are the most dangerous people to have in charge.” — Margaret Thatcher.

“(Not) even the US can impose peace: it has to be genuinely accepted by both parties involved.” — Margaret Thatcher

“Whether at home or abroad, the task of statesman is to work with human nature warts and all, and to draw on instincts and even prejudices that can be turned to good purpose. It is never to try to recreate Mankind in a new image.” — Margaret Thatcher

“Bribing regimes to comply with requirements which they should have acknowledged in the first place is not a process that appeals to me.” — Margaret Thatcher

“It is one of the great weaknesses of reasonable men and women that they imagine that projects which fly in the face of commonsense are not serious or being seriously undertaken.” — Margaret Thatcher

“To be free is better than to be unfree – always. Any politician who suggests the opposite should be treated as suspect.” — Margaret Thatcher

“Whether manufactured by black, white, brown or yellow hands, a widget remains a widget – and it will be bought anywhere if the price and quality are right. The market is a more powerful and more reliable liberating force than government can ever be.” — Margaret Thatcher

“The larger the slice taken by government, the smaller the cake available for everyone.” — Margaret Thatcher

“I think we’ve been through a period where too many people have been given to understand that if they have a problem, it’s the government’s job to cope with it. ‘I have a problem, I’ll get a grant.’ ‘I’m homeless, the government must house me.’ They’re casting their problem on society. And you know, there is no such thing as society. There are individual men and women, and there are families. And no government can do anything except through people, and people must look to themselves first. It’s our duty to look after ourselves and then, also, to look after our neighbor. People have got the entitlements too much in mind, without the obligations. There’s no such thing as entitlement, unless someone has first met an obligation.” — Margaret Thatcher