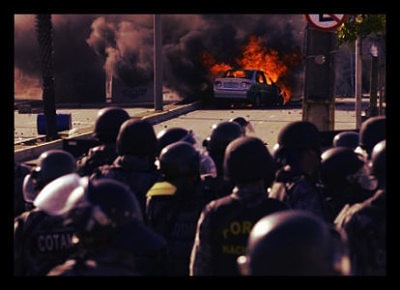 In the last several years, Brazil has made major efforts to eradicate extreme poverty. The number of people living on less than $1.25 a day dropped from 16.4% in 1995 to 4.7% in 2009. Nonetheless, there are still 10 million Brazilians who live in extreme poverty. Protests have thus broken out over the heavy spending on new soccer stadiums in preparation for the FIFA World Cup.

Over a million people took to the streets to protest inequality within the country. The protesters’ main concern is the government is major expenditures, in the billions, directed for new and refurbished stadiums for upcoming World Cup and Olympics. The protestors are demanding that the money instead be spent on schools, hospitals, and better public transportation.

When more than 50,000 people came together on Thursday the 27th, 90 people were injured in a barrage of rubber bullets and teargas. Their goal was to reach the stadium in Fortaleza where Spain was playing Italy in the Confederation Cup, but their efforts were unsuccessful. Brazil has a history of violent oppression and the police attacks during the recent upheaval have certainly touched a nerve.

The President of FIFA, Sepp Blatter, responded to the protests saying, “I can understand that people are not happy, but they should not use football to make their demands heard. Brazil asked to host the World Cup. We didn’t force it on them.” FIFA is expecting to make record profits from advertising and broadcasting. Money that will not benefit the Brazilian people.

Marcos Nobre, a political philosophy professor at the University of Campinas and author of a new e-book on the revolt, was interviewed by Reuters about the recent protests. He said, “The streets are saying to the politicians: you have heard our voices, now let’s see what you will do with this.”

Nobre also claims that the demonstrations are far from over. The people will have to keep fighting if they want any real change to take place. Even with numerous economic successes, Brazil is still a country plagued by poverty. The residents only ask they receive the attention and assistance of the government before they start spending large quantities of money on mega-events.