Tag Archive for: March for Life 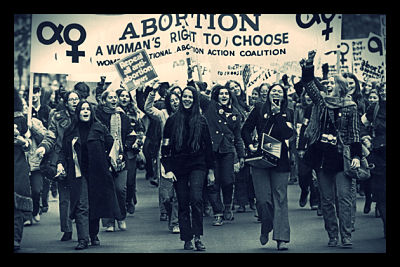 Customarily, the March for Life took place this Wednesday, where pro-lifers who have been working to rid of the law since first enacted 41 years ago, protested in Washington. This year’s march took a different approach, as it focused less on portraying horrifying graphics to inflict guilt and concentrated more on adoption services as the alternative for an unwanted pregnancy.

Supporters of Roe v. Wade were present in Washington as well, holding signs that read, “Keep Abortion Legal” in rebuttal to the March for Life protests.

United States President Barack Obama released a statement upholding the message of Roe v. Wade and promised to stay committed to the “guiding principle: that every woman should be able to make her own choices about her body and her health.”

Obama added, “We reaffirm our steadfast commitment to protecting a woman’s access to safe, affordable health care and her constitutional right to privacy, including the right to the reproductive freedom… And we resolve to reduce the number of unintended pregnancies, support maternal and child health, and continue to build safe and healthy communities for all our children. Because this is a country where everyone deserves the same freedom and opportunities to fulfill their dreams.”

Since Roe v. Wade was enacted, changes to the laws have made it more difficult for women to seek abortions, and now more than ever battles are being fought mostly at the state level. The support of the Obama administration is crucial to protecting women’s reproductive rights overall; however, women are still struggling to obtain safe abortions or any reproductive healthcare for that matter due to limitations passed over the past couple of years.

As per information provided by Guttmacher Institute, an innovative foundation that supports and campaigns for easy access to reproductive healthcare, 22 states added roughly 70 restrictions on abortions in 2013. Over the past three years, approximately 200 restrictions have been added in total, which consequently obstructs women from obtaining abortions. Some women have to drive hundreds of miles to find a doctor who will even discuss the matter.

Elizabeth Nash from the Guttmacher Institute has said, “There has really been a tidal wave over the last three years. If it is not the worst, it is the worst we have seen in a very long time.” Because of constraints enacted over the past couple of years, 54 abortion clinics have closed down completely as well.

Younger generations that take a pro-choice stance keep the message of Roe v. Wade alive and support women’s right to choose as they protest against the new constraints. Recently, Texas State Senator Wendy Davis filibustered for 11 hours in order to stop a threatening anti-women’s health bill, and many people packed the Texas State Capitol to support her.

The passing of the Affordable Care Act should bring about changes in favor of women’s reproductive health and support the message of Roe v. Wade. There are clauses written in the law that do not allow insurance companies to charge women more money due to their gender and involve not charging co-pays for cancer screenings and STD testing.

The 41-year anniversary of Roe v. Wade is a divisive time that splits Americans into a pro-life or pro-choice identity. To some, it celebrates an important movement for women’s rights, but to others it represents the continuous battle to outlaw abortion. Upcoming votes within the courts coupled with new laws outlined in the Affordable Care Act will dictate the direction that Roe v. Wade is headed.