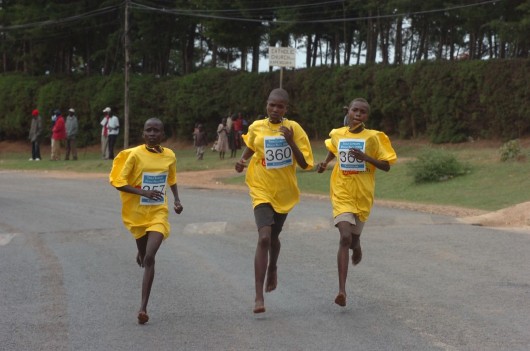 The runners traveled from Lodwar to Lake Bogoria, 520 miles in 22 days. They carried an Olympic-style torch, which was passed from walker to walker.

Although many of the runners have been touched by ethnic violence, Kelai launched the walk to commemorate the loss of his three uncles who were killed by cattle rustlers 25 years ago.

“Last year at least 310 people were killed and more than 220,000 fled their homes as a result of inter-communal conflicts attributed to competition over land and water resources, cattle rustling, and struggles over political representation,” says the United Nations.

The Aegis Trust, a British non-governmental organization, coordinated the walk. The Kenyan runners engaged with young people at risk of violence and the group posted photos of their journey on Twitter with the hashtag, #kenyawalk4peace.

Elim Okapel, a Turkana elder, decided to join the athletes on their journey. He says, “It is now 48 years that we have preached peace and we have not got a remedy. We have decided walking was the only solution.”

Kelai, who believes education is key to avoiding violence as a lifestyle, says, “To achieve any precious thing, you must pay a price so that you can be crowned. For peace to be realized and enjoyed in this region, we must go that extra mile.”

Kelai hopes that the Kenyan government will soon build schools in the north to help change the lives of all who are subjected to violence.

He says, “With the young generation being educated better than our parents, it will be easy to transform the way of life.”