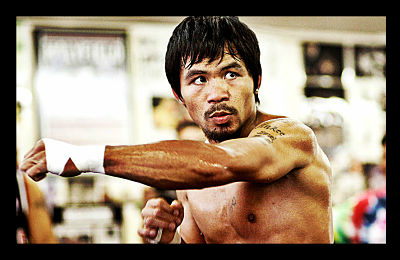 Manny Pacquiao is much more than a national sports hero for the people of the Philippines.  He is a sign of resolve, strength, and hope in the face of a horrific disaster.

On November 23, Pacquiao began his boxing comeback against Brandon Rios in Macau for the WBO Welterweight title.  Leading up to the fight, Pacquiao proclaimed that he would dedicate his effort in honor of the victims of the devastating typhoon that hit the Philippines earlier this month.  Pacquiao almost always dedicates his fights to the people of his native country, but this time, that dedication had special meaning.

When the typhoon hit, Pacquiao was embroiled in his brutal training schedule leading up to the match.  In lieu of abandoning his training to visit the region, Pacquiao decided to push forward in order to win the match and give the people of the Philippines a much-needed reason to celebrate.

The “super typhoon” that ravaged the Philippines is one of the most deadly and tragic national disasters in global history.  Typhoon Haiyan, as it has been named, is responsible for 3,976 deaths, 1,598 missing persons, and 18,175 injuries, according to the National Disaster Risk Reduction and Management Council.  The brunt of the damage was felt in the Eastern Visayas region.  The region’s largest city, Tacloban, is unrecognizable from the structural damage and the breakdown of communication systems.

But as an example of the importance of “Pac-Man,” Manny Pacquiao’s nickname, to the people of the Philippines, the country’s leaders worked with Sky Cable to telecast the match at a local sports stadium in Tacloban for all to see.  Even in the face of such historic destruction, a Pacquiao victory would provide an “opportunity for us to relax and unite as a people,” says Eduardo del Rosario, Civil Defense Chief of the Philippines.

Pacquiao delivered. In a unanimous decision, Pacquiao defeated Brandon Rios for the championship belt, and with it, gave the Philippines a cause for cheer.  While a victory in the ring, unfortunately, cannot undo the devastation of Typhoon Haiyan, it does embody the indomitable spirit of the Philippines.