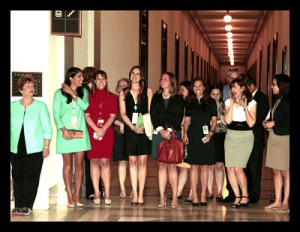 In his first visit to the United States since the infamous Las Vegas scandal, Prince Harry and other members of the Royal Family visited Washington D.C. The Prince’s first stop was Capitol Hill to view an anti-landmine photography exhibition in honor of the HALO Trust’s 25th Anniversary. HALO is an organization that works to remove explosives left behind in war-torn countries. The exhibit took place at the Russell Senate Rotunda and long-time HALO patrons, such as the Prince, and HALO board members were not the only exhibit attendees.

Filling the balconies and lingering in hallways, the women of Capitol Hill were out with a mission in order to welcome the Prince. The Rotunda was filled with women, presumed Capitol Hill staffers, intent on getting iPhone documentation and a glimpse of Prince Harry’s visit. Later that evening, he was scheduled to give a speech regarding HALO’s work at the home of British Ambassador Peter Westmacott.

The Prince’s trip did not stop at the Capitol. Prince Harry was scheduled to tour Arlington National Cemetery, then the Walter Reed National Military Medical Center. Later, he was scheduled to visit Colorado to be followed by visiting parts of New Jersey that were hit by Hurricane Sandy. His last stop on the stateside tour was a polo fundraising event in Greenwich Village in Manhattan.