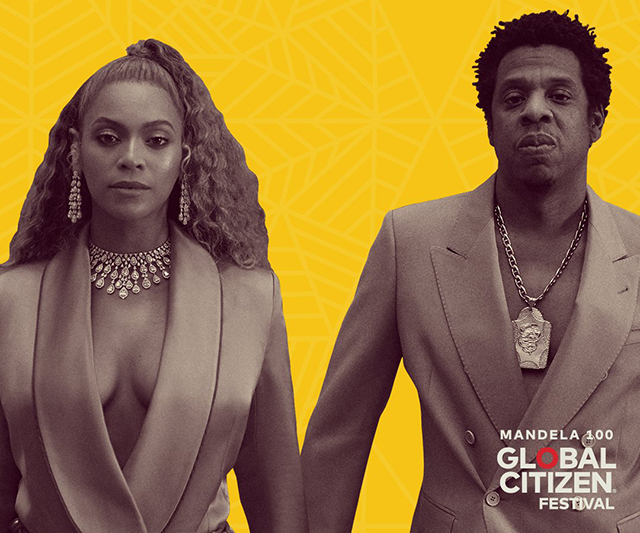 Singer Beyonce and her spouse, rapper Jay-Z, will be among several major artists to perform at Global Citizen’s Mandela 100 Festival in December 2018 in Johannesburg, South Africa. Other artists scheduled to perform are Ed Sheeran, Chris Martin, Pharrell Williams, D’banj, Femi Kuti, Sho Madjozi, Tiwa Savage and Wizkid. This latest concert campaign is said to be Global Citizen’s ”biggest campaign on the Global Goals to end extreme poverty ever.”

According to Global Citizen, the festival is to represent a celebration of Mandela’s legacy as an exemplary leader, his fight against apartheid, and his methods of non-violent protest that shaped the future of South Africa, setting an example worldwide. The Mandela 100 festival will be the first-ever musical event organized by Global Citizen in Africa

As an organization that is composed of members worldwide, Global Citizen is a model example of a successful nongovernmental organization (NGO), a true grassroots movement. The organization has projected some major numbers for 2018: an estimated 2.25 billion people worldwide are expected to receive some form of poverty relief from Global Citizen, ranging from a year of free education for children to clean water for an entire community.

Global Citizen divides its goals into nine separate categories, each representing a broad set of issues that need to be resolved. They are:

Global Citizen’s goal is to eliminate extreme poverty worldwide by 2030—just 12 years from now. And it seems that the organization may accomplish its goals, having secured a whopping $2.9 billion in funding from government organizations worldwide for 2018 alone.

How Everyone Can Help

But besides relying on funding from government bodies, Global Citizen asks that individuals take action as well, through twitter, email or petition. Global Citizen’s website offers a streamlined way for its constituents to influence representatives not only in their own country but in countries worldwide.

Some of the most recent and significant contributions to Global Citizen have come from the U.K., Norway and the E.U. These nations gave £225 million, Kr.2.07 billion and  €337.5 million to Global Citizen’s Global Partnership for Education project, respectively.

Mandela 100 Festival: A Festival For The People

The Mandela 100 Festival begins on December 2, 2018, and besides the proceeds going toward Global Citizen’s international fight against poverty, the other goal of the festival experience is to ignite a passion in young people to feel empowered to make changes in the world. Global Citizen wants to involve youth, on an international level, in the fight against extreme poverty.

Global Citizen’s website states it wishes to “galvanize young, passionate people across Africa to pressure their leaders to make important strides.” In fact, the motto for the festival is “Be The Generation.” Considering that Global Citizen is expecting to end abject poverty worldwide in little over a decade, millennials may just become the generation to tip the scales in the ongoing fight to elevate all members of our global community.