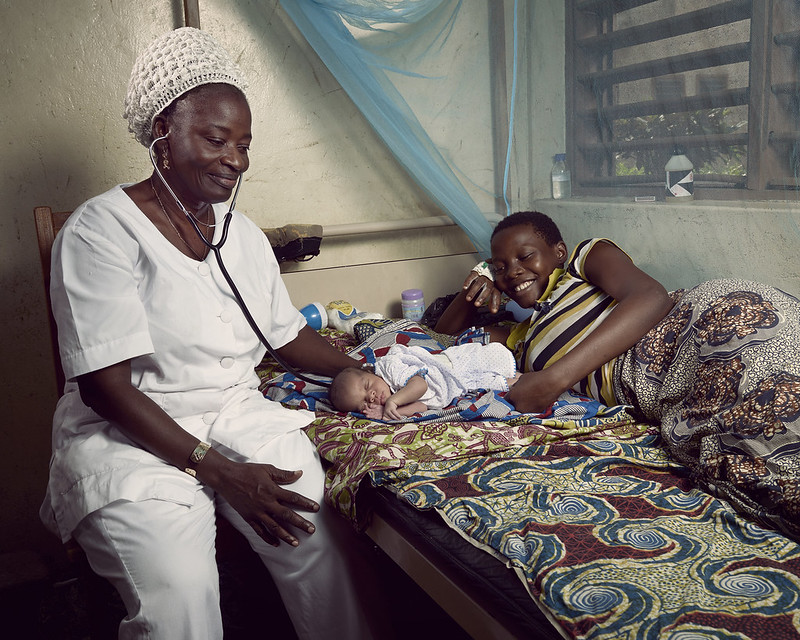 In September 2000, the United Nations released a list of eight Millennium Development Goals that aimed to enhance gender equality, literacy, education and health in developing nations. Goals four through six specifically target the need to improve child mortality rates, maternal health and disease prevention in underdeveloped regions. Achieving these goals requires information distribution among populations, thus equipping individuals with the resources necessary to practice safe self-care. Two healthcare apps called MedAfrica and the Mobile Alliance for Maternal Action (MAMA) are providing these resources to the most remote parts of Africa. The apps give life-saving health advice via voice calls, SMS and the web, and are working to eradicate healthcare inadequacies in Africa.

The experiences of many developing countries showcase correlations between low poverty rates and the success of healthcare systems. Low-income regions face high child mortality, low economic and educational development and increased disease transmission. Overcrowded living conditions common in low-income areas aid in the rapid spread of disease. In many African nations, the lack of available medical practitioners increases infection rates, places a financial strain on families and reduces the availability of educational health resources. Kenya, for example, has more than 40 million residents but only 7,000 medical professionals, which presents a clear disparity in access to care compared to higher-income countries.

Pregnant mothers often suffer the most from poverty. In low-income countries, more than 500,000 women die every year either during or after pregnancy. According to Dr. Charles P. Larson, improper prenatal care not only affects mothers, but it also threatens children’s growth and overall health. Children may face impaired cognition, causing intense behavioral problems and hindering school performance. The primary reason for these problems is a severe lack of access to healthcare information, which highlights a dire need to deliver accessible healthcare to underserved populations. Healthcare apps are helping many regions of Africa do just that.

Shimba Technology launched MedAfrica in 2011 with the hope of providing health information and connectivity resources to people in Kenya and Uganda. The company’s primary goal was to increase interaction between practitioners and their patients through different communication systems available on the app. However, like other healthcare apps, MedAfrica does far more than create conversation. While in-person consultations often monopolize a doctor’s time, MedAfrica relieves pressure on overworked practitioners. The app’s audio calls, SMS and online instructions give individuals the tools they need to deal with general problems while allowing immediate medical issues to have a doctor’s time and attention.

MedAfrica users simply input their symptoms to receive diagnoses, basic information about medicine and a suggested treatment routine. If a patient needs to visit a doctor, the app provides a detailed registry, so the patient can choose who will monitor their care. The registry also defends against fraudulent providers, as every physician listed must undergo vetting and receive approval.

The app stands out from other healthcare apps for its success. MedAfrica won €15,000 in the 2012 Ericsson Application Awards, an annual competition that recognizes international app excellence. The app was also named one of the Top 10 Favorite Startups at Silicon Valley’s DEMO Conference due to its “hit factor” and “Technology for Good” assessment. In the future, Shimba Technology plans to expand MedAfrica’s reach in Africa before venturing into Eastern Europe and Southeast Asia.

Limited access to medical counsel is particularly alarming for impoverished pregnant women who are at a greater risk for preterm birth, restricted intrauterine growth and maternal death. Former Secretary of State Hillary Clinton launched the Mobile Alliance for Maternal Action (MAMA) in 2011 to address this issue. MAMA now provides innovative solutions for health information deprivation in Bangladesh, India, Nigeria and South Africa. Since its inception, the app has collected $4.5 million in public and private investments.

Because communication channels differ in each country, MAMA alters its program based on phone and internet access, literacy rates and channel cost. For example, when literacy is low, MAMA uses audio messages instead of SMS. If internet access is widely available, the app relies on web connection. Local dialects in the app also help customize user experiences and increase usage rates. In these ways and more, MAMA is constantly changing to accommodate its users’ locations and situations.

Additional functions of the app include peer support, knowledge sharing, and the option to turn on notifications. Some of the most significant MAMA app features are birth plan distributions, childcare and breastfeeding tips and the option for mothers to record their due dates in order to learn more about their pregnancy stages.

In just eight years, MAMA has gained almost 3.5 million subscribers in four countries alone, making it a success among a plethora of healthcare apps. MAMA recently invested $10 million into building its programs in Bangladesh, India and South Africa, three countries where the app has been largely successful.

As MedAfrica and MAMA continue their work, the countries in which they operate will become one step closer to achieving at least three of the United Nations’ Millennium Development Goals. Increased access to proper healthcare and self-care information reduces poverty by increasing self-sufficiency and allowing families to focus on education, entrepreneurship and other means of national development. Healthcare apps are one proven way to accomplish this goal. 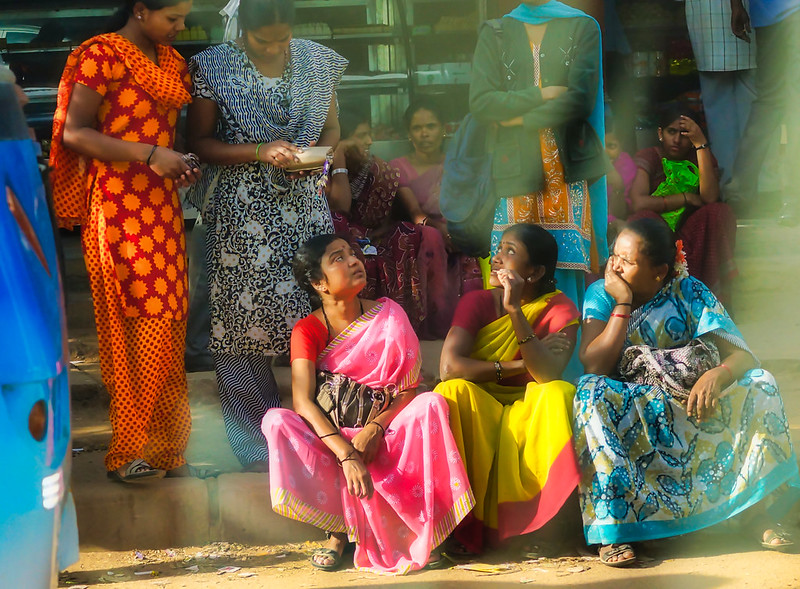 Women’s health in India is still vulnerable to several risks such as high maternal mortality rates, lack of preventative care and misinformation about family planning and contraception. Despite this, India has proven itself a pioneer in technological innovation among developing countries and it is putting its new innovations towards improving women’s healthcare.

Although maternal mortality rates in India have declined substantially in the last decade, the number of recorded deaths related to pregnancy complications in the country is still remarkably high. A report by UNICEF estimates that 44,000 women die due to preventable pregnancy-complications in India yearly. These complications often stem from a lack of knowledge and inherently the inability to understand that their baby isn’t developing correctly. This lack of knowledge results in fewer women seeking treatment that could save their lives. To combat this, organizations are developing innovative mobile apps to help women stay proactive and educated about the health of their babies and the status of their pregnancies.

For example, in 2014, MAMA (Mobile Alliance for Maternal Action), an organization dedicated to women’s maternal health in developing countries, developed a digital service called mMitra. The service sends recordings and SMS messages to new and expectant mothers with crucial information about the early stages of pregnancy and child development within the first year of life. The app, which collected 50,000 subscribers within months of its launch, sends educational content to women in their native languages and at times of their choosing. The app,  mMitra ultimately aims to help women pick up on pregnancy and child development issues early and seek treatment before symptoms escalate or endanger the mother and child.

Mammograms are an essential part of preventative care for women globally. Despite this, it is estimated that over 90 percent of women in the developing world go without this essential screening examination. Particularly, in India, high-costs, unsustainable electricity and lack of properly trained radiologists are major causes for the inaccessibility to mammograms and other procedures like it. More women die of breast cancer in the country than anywhere else in the world (around 70,000 women annually). While these high death rates due to inaccessibility to preventive care are tragic, they’ve inspired innovative medical devices that have revolutionized women’s health in India.

One such device, known as iBreastExam was invented by computer engineer Mihir Shah. Shah invented the device to ensure that women in even the most rural parts of India could get affordable, accurate breast exams and seek treatments as needed. The battery-operated wireless machine is designed to record variations in breast elasticity and performs full examinations in five minutes, posting and recording results through a mobile app. Not only that, the exams are painless, radiation-free and are extremely affordable at $1 to $4 per exam.

Lack of family planning and knowledge of contraceptive options is another challenge in improving women’s health in India. Many Indian women shy away from modern family planning and contraception due to things like familial expectations, cultural influence and a general fear stemming from misinformation from disreputable resources. Family planning and the use of contraception could reduce India’s high maternal mortality rates. However, without proper education on these matters, it is difficult for young Indian women to make informed decisions about what options are best for them. But, in the midst of India’s technological revolution, an increase in accessibility to mobile devices is steadily transforming the way women are gaining health awareness in India.

There is a particular mobile app that is playing a huge role in improving women’s health awareness in India. Known as Gyan Jyoti, the mobile app provides credible information through educational films, TV advertisements and expert testimonials from doctors. It also acts as a counseling tool for ASHAS (appointed health counselors). The app allows ASHAS to expand their knowledge of family planning through an e-learning feature, customize their counseling plan according to the needs of clients and monitor and store client activity in order to provide the best information possible.

Overall, while there are still many challenges in improving women’s health in India, the country has proven itself to be a pioneer in technological innovation. Just as well, it’s proven that transformation is possible by putting its innovations towards women’s health awareness through mobile apps, life-saving hand-held devices, and educational platforms that can be accessed at the click of a button. 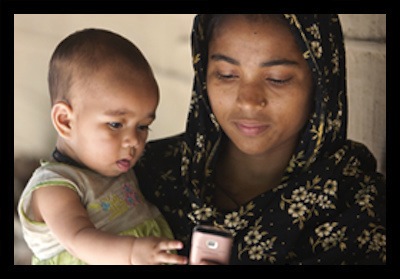 “It’s time for the second tetanus toxoid vaccine. Just one more and your baby will be protected against tetanus. Go to your clinic now,” reads one mobile message from Mobile Alliance for Maternal Action (MAMA).

Bangladesh is hard at work trying to meet Millennium Goals 4 and 5. In partnership with MAMA, the country has implemented a project to reduce mother and child deaths. Over 500,000 women already subscribe to the service. Named Aponjon, meaning “dear one,” the project sends over 350 free text and voice messages to expectant and new parents. The messages contain information about a range of pregnancy and childcare-related subjects, such as nutrition, vaccinations and when to go to the doctor. They can even be selected by topic, so mothers can request messages about preventing HIV transmission to their children, or post-partum family planning, if they require it. The messages are not just for mothers, either. There are some tailored for fathers and mothers-in-law, as well.

Aponjon allows women who cannot make it to clinic or who are nervous to talk to doctors, to understand how to take care of themselves and their babies. Since the adult female literacy rate is only 57.7 percent, messages are sent vocally as well as through SMS text.

The mobile company Telenor is also trying to expand health services, now that Bangladesh uses mobiles, to other countries as well. It currently offers a service where physicians answer health questions by phone at any time of day. It is also working on using video conferencing for doctor-patient interactions.

Bangladesh is also working to increase mothers’ health in other ways. Female education is increasing in the country, and currently more girls are educated than boys. Increased education leads people to seek more healthcare, as well as to have fewer children. There is also more education in medical-related fields. Also, the Bangladesh government, WHO, and the UN Population Fund introduced a program to train 3,000 midwives by 2015. Since only a third of Bangladeshi women have a skilled physician with them as they give birth, the program is designed to increase maternal health. Over 1,000 people have already completed the first stage of training.

All of these goals put Bangladesh well on the way to meeting and exceeding the Millennium Goals, in addition to creating a happier and healthier population for the country.