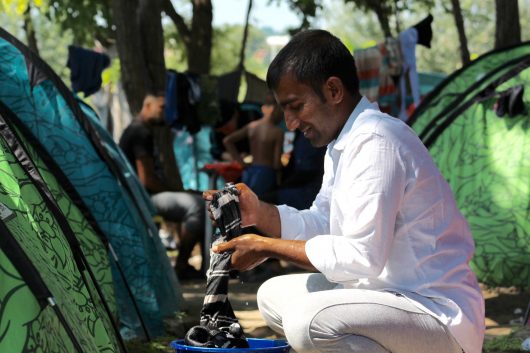 At the Malta Summit, an informal meeting of EU leaders held on Feb. 3, U.K. Prime Minister Theresa May announced a new aid package in response to the Refugee Crisis in Europe. The plan includes £30 million in provisions including clothing, shelter, medical care and financial support for stable infrastructures in developing nations willing to accept refugees.

The plan is meant to deter refugees from entering the EU and, instead, compel them to migrate toward South America and Asia. The government has stressed that immigrants will only be resettled to participating host nations should they, themselves, hold an interest in doing so.

But this follows the U.K.’s refusal to participate in a continent-wide program addressing the region’s response to the Refugee Crisis in Europe and admittance of only a few thousand refugees.

The summit had been catalyzed by concern over a rapid intake of immigrants following Brexit and President Trump’s strict immigration policies. The specific areas of interest have been listed as Greece, the Balkans, Syria, Libya, Egypt, Tunisia, Morocco, Algeria and Sudan. Some European leaders have even deliberated sending immigrants back to their home countries in hopes of deterring people from making the journey in the first place.

In order to do so, there has been a discussion of a controversial agreement with Libya that would help curb the movement of immigrants across the Mediterranean and, supposedly, assist the severity of the Refugee Crisis in Europe.

Libya remains one of the primary migrant points for thousands of refugees across northern Africa. However, there have been reports of authorities wrongfully detaining, torturing, shooting and even killing refugees.

The reports have gone mostly unacknowledged in the midst of the nation’s ongoing civil war, but the British government has knowingly continued training and financial support of the Libyan coastguard despite multiple attacks on rescue ships and refugee killings.

Following the Malta Summit, the EU will purportedly be handing even more responsibility over to the Libyan authorities. The agreement will potentially allow the coastguard to go so far as turning away rescue ships seeking asylum in Europe.

UNICEF has made a statement declaring this the deadliest winter for refugees in recent history. At least 190 children have drowned over the past three months, and countless others were in peril.

While the proposed aid package has the potential to go far in helping refugees at risk along their journey, the EU has not done enough to address the issues the Refugee Crisis in Europe poses to all parties involved. It is not enough to neglect the misconduct of the Libyan authorities nor to send refugees on yet another journey to regions that cannot provide for them as wholesomely as Europe can. And it is certainly not enough to simply send refugees back to their home countries.