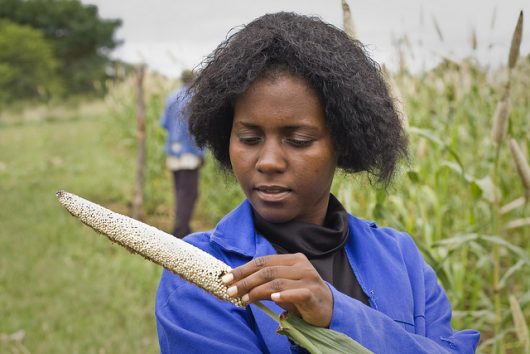 Zimbabwe faced a devastating drought in 2016 and food security continues to be a major problem in the South African country, primarily affecting young children. Since 2010, the U.S. Agency for International Development (USAID) has been heavily involved in assuring Zimbabweans’ food security, focusing on supporting farmers, strengthening agricultural markets and managing natural resources.

USAID increased its spending in Zimbabwe by $21.5 million in 2015, expanding interventions to water sanitation and hygiene. However, gender norms in Zimbabwe also affect the lack of food security, especially for children.

Most men in Zimbabwe have little to do with feeding or caring for their children, leaving mothers to do the majority of child-rearing. But for three meals a day, Zimbabwean mothers must search for firewood, make a fire, collect water, cook and clean dishes. The rest of most mothers’ days are spent tending to their families’ crops, leaving little time for mothers to focus on childcare and healthy nutrition.

Social and gender norms in Zimbabwe combine to mean that men are not heavily involved in child rearing, which is viewed as a women’s responsibility. The concept that men get involved with their children is so foreign to Zimbabwean culture that men who do involve themselves get accused of being under a love spell or potion.

Australia was the first to formally implement the MCC Institute under the Australian Human Rights Commission. The MCC Institute is a collaborative initiative that strives to address entrenched gender inequalities. Now, MCC’s strategy is used by a number of organizations worldwide, such as the U.N. and USAID.

As its name suggests, MCC targets men. The MCC Institute was actually founded by a woman and women are heavily involved in the Institute, but the founder recognized that political power still rests largely in the hands of men and engaging men would help accelerate change. Changing gender norms in Zimbabwe is more than just a women’s issue, and men have a responsibility to step up beside women to advocate for equality.

MCC involves appealing to men rationally and emotionally. Its strategy defines the business, economic and social benefits of gender equality and urges male leaders to confront and understand the challenges women close to them face every day.

In Zimbabwe, USAID’s MCC campaign focuses primarily on gender equality within households. In comparison, the MCC Institute of Australia focuses more on equality in the workplace and in society in general.

Participants of USAID’s MCC campaign, called Male Champions, recruit their peers and hold monthly meetings and group training. At the meetings, Male Champions discuss their roles and responsibilities at home and the interactive training sessions challenge the men to debate and resolve gender-related problems. The meetings also specifically address gender and social norms that present barriers to good nutrition and gender equality.

Male Champions in Zimbabwe come to recognize that their manhood will not be diminished by cooking. One Male Champion said that he learned how to make his daughter porridge and feed her. A USAID survey also found statistically significant improvements in supportive behaviors such as:

USAID also saw an increase in joint decision-making between spouses from 30 percent to 82 percent in just one year. Overall, USAID’s MCC campaign has made a significant difference in changing gender norms in Zimbabwe to ensure gender equality and nutritional security for children.