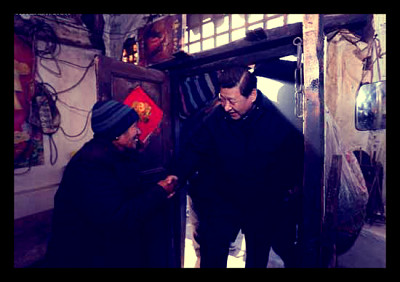 Xi Jinping who is a General Secretary of the Communist Party of China visit the Fuping County late last December. Fuping County is regarded as one of the most impoverished localities in China with an annual net income per capita that is less than half the set poverty line of 2300 yuan, or $390 USD.

Xi Jinping visited two villages’ homes, clinics, and businesses and spoke with each community concerning income, food, education and medical care. Xi’s visit was broadcast on national television to showcase the rural poor of China. Fuping County resident Tang Zongxiu imparted, “The General Secretary knows life here is difficult and he visited us to ask about our situation. He won’t let us suffer.”

Following his visit to Fuping County, government and private sponsors donated money, food, and other household items. Government work crews and researchers were dispersed and also aided the county. Xi stated, “The most arduous and heavy task facing China in completing the building of a moderately prosperous society is in rural areas, especially poverty-stricken regions.”