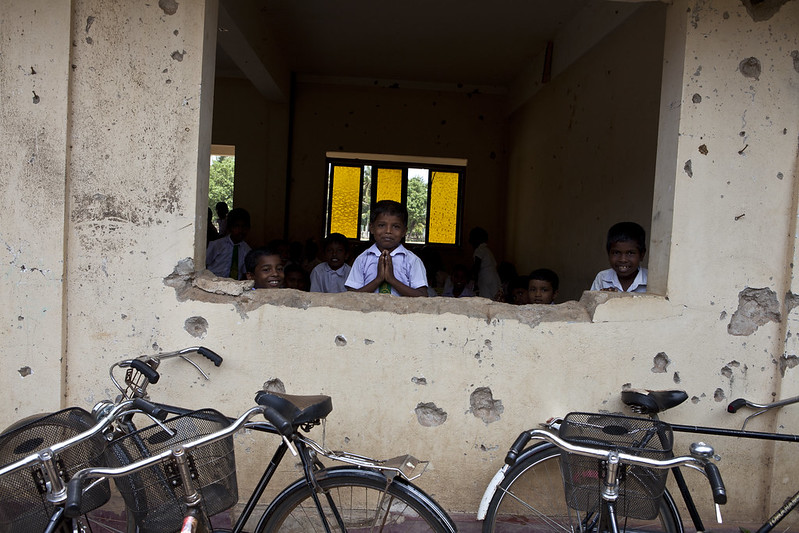 Mohan Peiris, the Permanent Representative of Sri Lanka to the U.N. said, “Sri Lanka had a success story to tell the world – unfortunately, this is now a forgotten story.” The news that ought to be extensively disseminated to the general public is the successful rehabilitation of all 594 child soldiers in Sri Lanka that the LTTE recruited without prosecution, with priority given to their investigations and swift resolution of their cases. Lamentably, misinformation that the remnant elements of this group of non-State actors propagated hounded the diffusion of this news.

The Way Children Become Soldiers for the LTTE

A documentary by The Social Architects South Asia features interviews with former child soldiers in Sri Lanka, who talked about the myriad motives for their engagement with the militant organization.

Due to the sexual violence –sex slavery and mass rape– that the Sinhalese Sri Lankan government forces committed against Tamil females, a significant fraction of the girls in the LTTE, where men and women were considered equal and held the same right to identify as combatants, as a ray of hope and a promise for change, for which they joined the organization.

While this pattern became increasingly famous as the sexual violence peaked in 2009, the atrocity persisted post-war. The LTTE grants women the title of “Birds of Freedom.” Though this can appear rather voluntary, the law forbids a child from willingly enlisting in the LTTE armed force. Thus, every form of recruiting counts as abduction.

Next, the LTTE will either torture or kill families, who object to the admission of their children into the Baby Brigade of the LTTE or make them pay the price in cash or gold. In order to save their children, many affluent and educated families fled to North America, Europe and India.

Poor families oftentimes originating from the lower caste had little choice but to surrender their children, who would then be the front-line attackers. On account of their refusal to join the LTTE, the group abducted many children, the documentary reported.

In June 2003, the LTTE and the Sri Lankan government, together with the United Nations Agencies and the Tamil Rehabilitation Organization, agreed to the formal Action Plan on Children Affected by War with the aim of stopping the recruitment of minors and releasing any remaining juveniles to their families or new transit camps. However, despite the agreement, the LTTE had recruited more than twice as many children as it released. The LTTE deliberately started its re-recruitment of child soldiers in mid-2004 under the pretext of guarding them against external danger.

UNICEF planned a public awareness campaign on children’s rights as part of the Action Plan for Children in conjunction with the National Child Protection Authority to express objection to child recruitment. UNICEF then put the mass media campaign on hold indefinitely in January 2004 because the LTTE did not agree with the core messages.

In March 2006, the LTTE highlighted that the topic of child recruiting does not belong within the purview of the CFA and should not be on the discussion table at the next round of negotiations during a meeting with the Norwegian ambassador Hans Bratskar in preparation for negotiations in April 2006, according to SCOPP report.

According to Bratskar, the history of the six rounds of negotiations shows an acknowledgment that child recruiting should stop and that continuing recruitment was very detrimental to LTTE’s reputation internationally. The LTTE refused to attend the April negotiations as a result of this conversation.

The Bring Back the Child Campaign

In February 2009, the Srilankan government and UNICEF launched a “Bring Back the Child” campaign. The government troops defeated the LTTE in May 2009.

In October 2009, officials from the Military of Defense reported that a leading school in the capital Colombo welcomed 144 former child soldiers in Sri Lanka, who had received rehabilitation in the north under the first stage of the rehabilitation program.

Sri Lanka rehabilitated all 594 child soldiers in February 2021 under LTTE recruitment without prosecuting them, according to The Morning. Exposure to violent conflict and the death of loved ones can result in trauma and other psychological repercussions that have an impact on a child’s development and education. They received national identification cards, which made them feel like they belonged. With the aid of rehabilitation programs, they went back to their families. Today, the majority of child soldiers in Sri Lanka finish high school or get a job-related education.

Despite the amazing progress of the Sri Lankan government in putting an end to the problem of child soldiers, escaping the vicious cycle of violence while dealing with a series of cognitive and behavioral problems as a result of past traumas requires prolonged care, welfare, psychotherapy, appropriate monitoring and social support. It is essential that people discuss the institutional and societal prejudice that former child soldiers experience today as well as how to prevent the recruitment of child soldiers altogether.