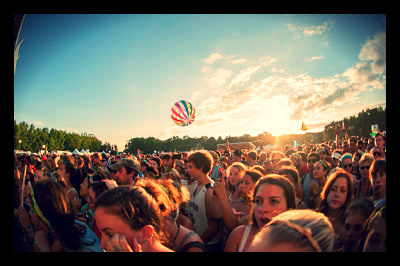 Every year, thousands of music festivals take place around the world. Perhaps inspired in part by George Harrison’s 1971 arena benefit show, “The Concert for Bangladesh,” a multi-artist concert that raised money for East Pakistani refugees following the Bhola Cyclone, festivals now incorporate special activities that contribute to poverty relief in surprising ways. Here is a list of threee music festivals from around the country that play good music while contributing to relief organizations.

1. Firefly hosted by Red Frog Events
A relatively new music festival, Firefly began in 2011 and takes place every year in Dover, DE. Located “among lush wooded landscapes,” Firefly brings in notable alternative and popular artists such as Yeasayer, Lupe Fiasco, and Bassnectar. Unlike other festivals, Firefly offers a TOMS booth which allows festival attendees to purchase a pair of TOMS shoes and have them customized by an artist. As with other TOMS programs, including eyeware, for every pair of shoes sold TOMS will donate another as part of its One For One Movement.

2. Bonnaroo
Located in Tennessee on a 700 acre stretch of land, Bonnaroo celebrate camping, music, and global awareness. One section of their festival is dedicated to “Planet Roo,” an area dedicated to a “variety of nonprofit organizations committed to protecting our resources, promoting healthy lifestyles and making the world a better place,” states their website. Although unrelated to global aid, Bonnaroo has also asked buyers to donate an additional $1 when they purchase their tickets.  The proceeds go toward an on-site solar array and other eco-projects.

3. Lollapalooza
Chicago hosts this behemoth of a festival that began in 1991 by Jane’s Addiction front man, Perry Farrell. Over a three-day time period, the festival showcases popular and up and coming artists to over 225,000 fans. In addition to the concerts, Lollapalooza also offers informational booths dedicated to non-profit organizations, including One, a global grassroots advocacy organization, “dedicated to fighting extreme poverty, preventable disease and hunger around the world.” Alongside One is Oxfam, another global organization that seeks to correct the inequity created by poverty, hunger and injustice.