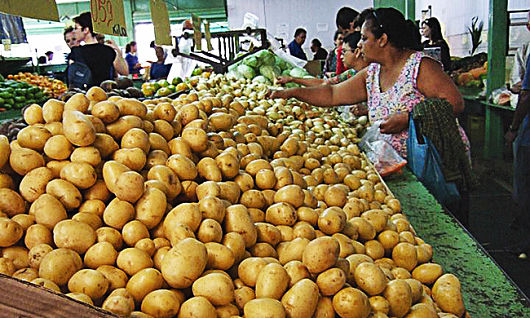 Belo Horizonte, the third most populous metropolitan city in Brazil, is one of the most progressive actors in poverty reduction. Home to nearly 2.5 million, Belo Horizonte practices the Right to Food that perceives food as a human right rather than a commodity. Poverty rates have dropped dramatically in Belo Horizonte since policy makers enacted this act in 1993.

The Right to Food guarantees healthy and accessible food to all citizens in Belo Horizonte. Policy makers use systematic approach to effectively execute this law by implementing the following techniques:

Certainly no policy goes without a financial cost—the Right to Food law calls for a 10 million dollar yearly budget. While seemingly large at first, this amounts to two percent of the overall budget of Belo Horizonte. Policy makers have established budgetary committees to foresee the maintenance of this budget in accordance with the economy. This novel distribution of funds has proven successful, largely due to the positive returns the Right to Food law has enabled in the job market.

The effects of the Right to Food law in Belo Horizonte are immeasurably positive for the future of poverty reduction. To ensure food distribution, Belo Horizonte implements affordable food stations that act as restaurants around the city. People of all walks of life, ranging from low-wage workers to businessmen, eat at these restaurants. This social integration eliminates the shame behind hunger and promotes a culture where everyone is deserving of food.

Poverty has reduced drastically in Belo Horizonte, Brazil since the Right to Food law passed in 1993. Benefits include:

Scholars regard Belo Horizonte as a progressive city in its utilization of existing resources. UN Special Rapporteur, Oliver de Schutter, reports: “I think we should use the example of Belo Horizonte as a lesson taught to us, food is not a commodity. It is a human right and it should be treated as such…”

Belo Horizonte did something the U.S. has yet to do, tackle poverty from a bottom-to-top approach. By recruiting the help of local farmers, Belo Horizonte helped the impoverished by teaching them ways to help themselves. Policy makers isolated the detrimental effects of competition in the market and eradicated them, thereby emphasizing the freedom in free markets.

The Right to Food serves as an example of the role democracy can play in helping the world’s poor.