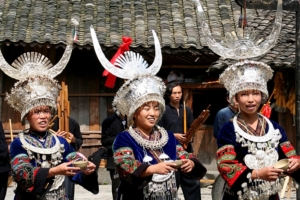 Approximately half of the world’s 7,000 distinct spoken languages are at risk of extinction within this century as a result of market globalization. Generational language loss emerges from the prioritization of dominant languages over minority languages. Yet, online communications technology expands outlets for the promotion and preservation of endangered indigenous minority languages.

The People’s Republic of China (PRC) recognizes 56 ethnic minority groups, of which 55 have indigenous languages, numbering approximately 130. Indigenous peoples consisting of 1,000 or fewer people speak at least 20 of those languages. Out of 11 million ethnic Manchus, fewer than 100 have conversational fluency, a symptom of Standard Mandarin supplanting the Manchu language. The Hezhen, Tatar and She languages face circumstances like Manchu, while the Jinuo, Nu, Pumi and Yilao languages risk losing their conversational status.

Plaintiffs may file lawsuits in indigenous minority languages, and defendants without fluency in Standard Mandarin may request translators. Courts may conduct trials in native languages for the sake of convenience and efficiency, while the translation of court documents into many languages occurs in multilingual regions.

Autonomous regions receive latitude in structuring education in many languages. But such schools must also ensure skill in Standard Mandarin. As of 2012, bilingual education existed in 21 autonomous regions and 13 provinces, encompassing approximately 10,000 schools.

Policies incentivize minority authors and translators to write and publish in their native tongues. No cap exists on the quantity of minority language writings permitted, while the free provision of stripe codes further facilitates publication. State proposals to fund minority language magazines and journals raise questions of integrity and autonomous development.

An event held in September 2018 in Hunan province showcased technological options, such as the comprehensive recording of endangered languages. Among the advanced technologies discussed as language preservation tools were AI speech recognition and synthesis.

Tibetan monk and software developer Lobsang Monlam notes that even small inroads of digital technology on Tibet make a considerable impact. Internet, word processing and other adaptations of the Tibetan language currently exist. From grammar, character and spell-check programs to optical character recognition, speech-to-text and translation software, digital technology may substantially assist minority language preservation and promotion throughout China. Building upon the policies of the past with the technology of the present and future, justification exists for optimism about the future of China’s minority languages.