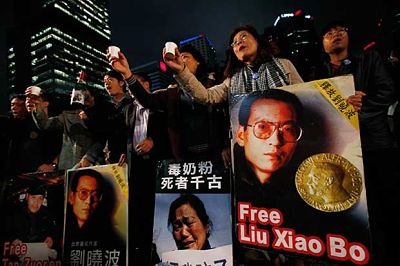 For the last five years, Nobel Peace Prize laureate and Chinese dissident Liu Xiaobo has been detained and serving a sentenced term in prison.

In 2008, Liu was confined for participating in Charter 08, which was a manifesto that called for democratic reforms in China. Due to this, Liu is now serving an 11 year sentence “for inciting subversion of state power.”

In light of Liu’s fifth anniversary of imprisonment, the world also experienced a devastating loss with the passing of Nelson Mandela. Coincidentally, Liu has been dubbed the moniker of “The Nelson Mandela of China.”

Both individuals earned prison time for the same efforts that also landed them their Nobel Peace Prizes. The Chinese government became highly uncomfortable at the similarities of these two individuals, and at the timing of the events.

No different than the rest of the world’s media, China aired coverage of the funeral of Nelson Mandela in South Africa. The coverage was censored, however, and excluded any “sensitive topics” that would have correlated directly to human rights and democracy or South Africa’s close diplomatic relationship with Taiwan.

United States Secretary of State John Kerry honored the anniversary of Liu’s imprisonment by providing a statement, prodding China to release Liu from prison, and his wife from her house arrest. Chinese foreign ministry responded by saying that Kerry “had no right to comment on the fate of Mr. and Ms. Liu.”

Chinese foreign ministry also went on to say that “China’s 1.3 billion people have the best right to talk about the country’s human rights.” Although various parts of the world consider Liu to be the “Mandela of China,” Chinese government abhors the comparison between the two individuals.

An editorial in Global Times was quoted saying, “Mandela was a Nobel Peace Prize laureate for leading African people to anti-apartheid victory through struggles, tolerance, and efforts to bridge differences. However, awarding a Chinese prisoner who confronted authorities and was rejected by mainstream Chinese society derides China’s judiciary system.”

Yet at one point in time, South African authorities also considered Mandela a “prisoner who confronted authorities and was rejected by ‘mainstream’ society.”

As of November of this year, Liu’s lawyer released a statement saying that “the dissident intends to ask for a retrial.”

Retrials are not common, but with so much pressure from western countries, there may be an interesting turn of events. Nicholas Bequelin of Human Rights was quoted saying that the chances of winning a retrial were small, but nonetheless, worth a shot with new leadership in place.

Liu Xia, the wife that is on house arrest, is believed to be suffering from severe depression. She has been denied any private medical care, and was financially dependent upon her brother until he too was jailed in 2011.

Xia and her brother have yet to be charged with an actual crime, other than the support of Liu and his efforts. Chinese officials have yet to acknowledge that Xia is even being detained. As the U.S continues to build a relationship with China, they hope to see progress made for Liu and his loved ones.