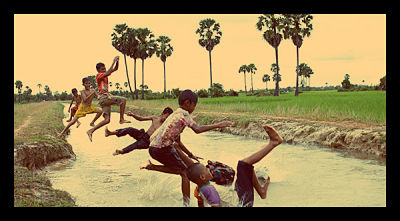 The restored canal in Cambodia has transformed lives for small rice-farming communities that depend heavily on rice for their livelihoods. Rice farming is the main source of income for 80% of Cambodia’s 14.5 million population, however, for years, farmers in the region have only been able to expect one rice cycle. Thanks to the restored canal, those in the area have enjoyed three harvests in just nine months, increasing total rice yield three times over.

Previously, the canal that zigzags across the rice paddy in the southern region of Cambodia was shallow, meaning that farmers had to depend on rainwater for a successful crop yield. Rainfall can be erratic and unpredictable. Two years before the restoration of the canal started, a bad drought destroyed rice crops, leaving scores of people hungry. The restoration involved dredging and enlarging 47 kilometers of canal in order to feed water to more than 41,100 hectares of rice in 12 provinces. Now at 6.5 kilometers wide, the canal is linked to a lake, and provides farmers with enough water to grow rice in three cycles of three months each. As a result of the project, approximately 11,240 families across the 12 provinces will have better irrigation for farming.

The restoration of the canal was funded by Sweden and Australia, and the work was carried out by an NGO in conjunction with local authorities. It was launched in an effort to help communities in vulnerable areas manage the risks of climate change. With the impacts of climate change expected to adversely affect the production of rice, it has been a goal of the UNDP to put mechanisms in place that will help to guarantee food production and food security in the future.

With rice yields already on the increase, farmers in the region are beginning to feel the financial benefits. Lim Savoeun, a rice-farmer, said the increased profits have made a big difference for her family. “In the past, we struggled to scrape by and sometimes had to loan money from others to fill the gap [in the income],” she said. “But we can avoid that since we are now able to grow rice for often that before. As long as there is water, we will keep working tirelessly on our land. We can’t complain.”