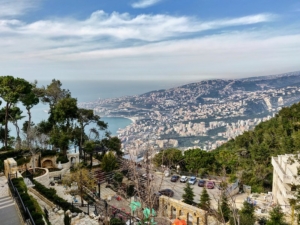 Lebanon is a small country in the Middle East that Syria and Israel borders. Once known as a prosperous leading regional center for finance and trade, the nation’s civil war crippled the economy. This traumatic event in Lebanese history eventually led to an economic crisis in Lebanon.

In 1975, civil war, Syrian occupation and clashes between Israel and Hezbollah destabilized Lebanon. Although Lebanon remains steady in economic freedom, it has encountered rough patches regarding politics. The economic crisis in Lebanon eerily compares to the current Syrian crisis. Both Lebanon and Syria have endured hardships of civil war and faced a surge in refugee intake.

Nearly 1.5 million Syrians have taken refuge in Lebanon as a result of the nation’s own civil war. The refugee intake has negatively impacted Lebanon’s finances, service industry and environment. The crisis has also driven 200,000 people into poverty and left nearly 300,000 unemployed. The environmental effects have slowed down the GDP (Gross Domestic Product) to nearly nothing, worsening the economic crisis in Lebanon. In 2018, the Lebanese growth rate was just 0.2 percent. As of 2020, Lebanon carries a $90 billion debt, which is about 170 percent of the nation’s GDP.

The second leading age group in Lebanon is the youth group. This makes it difficult for those in impoverished families to maintain a steady income or complete their education due to the demand in the workforce. The demand has also forced women who would normally take on household responsibilities to work low wage jobs for additional income. Due to the enormous refugee intake, Lebanese workers face much higher competition for jobs. The 1975 Civil War severely damaged the nation’s economy. Because of the war, Lebanon’s national output reduced by half and the nation lost recognition as a Middle Eastern banking hub.

The Fight Against the Crisis

In the fight for better living conditions for those living in poverty, Lebanon’s government launched the National Poverty Targeting Program (NPTP) in October 2011, implemented by the Ministry of Social Affairs and the Presidency of the Council of Ministers. The goal is to establish a national targeting system for the government. The system aims to improve the living conditions of the people, particularly those struggling in extreme poverty. The total cost of the NPTP was $9.34 million.

Habitat for Humanity has also been working to improve and provide housing for those in poverty in Lebanon since 2001. Habitat for Humanity builds, rebuilds, renovates and rehabilitates houses through partnership models to reach families in need of housing services across Lebanon.

The World Bank called for the formation of a new cabinet and said that it expected Lebanon to hit a recession by 2019. The World Bank comprises of many foreign donors who have pledged billions of dollars towards the aid that Lebanon desperately needs.

Lebanon has one of the world’s highest debts at 170 percent of GDP. Political conflict in the nation, as well as regional disputes, have impacted economic growth. With aid in place, it is hopeful that the economy can reboot despite the high poverty and unemployment rates that plague the nation. For now, thanks to the organizations that offer aid to the nation, the Lebanese people are maintaining a good and steady quality of life.