Tag Archive for: Laws in Morocco 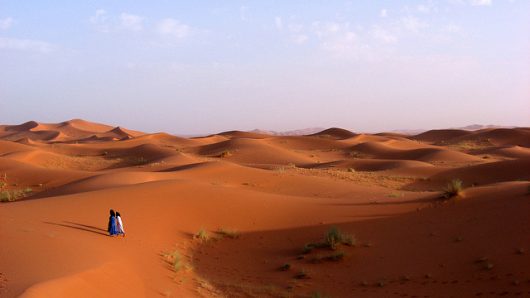 Morocco lies in the west of North Africa and is slightly smaller than the U.S. state of California. The country is both scenic and fertile with the Atlantic Ocean to its west and the Mediterranean Sea to its north. It’s in how the media misrepresents Morocco, a country with a great history, that much of its beauty is lost.

As of 2015, Morocco is the fifth richest country in Africa. Since it is one of the most visited countries, it generates two-thirds of its GDP through tourism and telecommunications.

How the media misrepresents Morocco, however, is through the depiction of its people’s faith, geographic location and traditionalism. An astonishing 98 percent of the country’s population are Muslims. They follow Islam—a religion that has a history of conflict and controversy with the Western world. Since September 11, 2001, the Western media has continuously exposed the wrongdoings of the Muslim faith causing further tension.

Moreover, Morocco is also an African nation, which, given the continent’s history of mass poverty, has only added to the media’s bias.

Finally, about 24 percent of the population is the Arabized Imazighen and about 21 percent are Imazighen—a community of people who are descendants of an Afro-Asiatic family which directly descends from the ancient Egyptians. The Imazighen are strictly traditional and often live in Morocco’s mountainous regions to preserve their language and culture.

It is true, that in essence, the Qur’an is the source of law, however, Morocco does have a French-inspired legal code. After the legal system was met with pressures from Moroccan women for a more balanced system, in 2004 the parliament issued a more liberal and balanced legal code.

The country is headed by a constitutional monarchy, which shares its power with the parliament. The monarch does have power over religious affairs, the country’s armed forces and the national security policy. The monarch also has the power to choose the prime minister.

The monarch’s political affiliation and power have been a subject of much controversy and debate—particularly in the last 30 years. Nevertheless, the Moroccans have voted in favor of this system, though they did vote to expand the parliament’s power in 2011.

Another aspect of how the media misrepresents Morocco is that it seems to ignore how the country is rapidly modernizing. It instead capitalizes on how Morocco has kept much of its ancient architecture and customs. The Western media reports the country to be “stuck in its ways” and “archaic” but ignores how it has tried to promote women’s equality, human rights, religious tolerance and social liberalization while upholding its Islamic heritage.

Morocco has seen much migration and urbanization of its communities. Its standard of living is also rapidly increasing. In fact, it is the most visited African nation with 10.3 million tourists in 2016 alone.

While one-third of Morocco experiences malnutrition, the government is actively trying to better the living conditions of those affected. For instance, in 1999 the Moroccan government set up a loan fund to help small businesses grow. In 2017, the government provided its impoverished communities with electricity and piped water.

Morocco, in fact, is one of the few Arab nations which could be self-sufficient in food production. It can produce two-thirds of the grains necessary for domestic consumption in a year. Morocco is trying to capitalize on this by attempting to use its great potential in hydroelectric power.