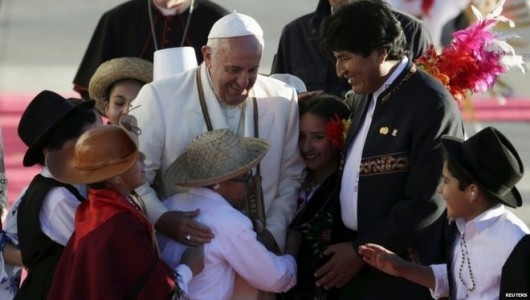 Pope Francis has been entertaining a wide variety of topics on his current Latin American tour, but poverty has remained at the top of his list.

“Do we realize that something is wrong in a world where there are so many farm workers without land, so many families without a home, so many laborers without rights, so many persons whose dignity is not respected?” the Pope said in Spanish at a stop in Santa Cruz, Bolivia. “Do we realize that that system has imposed the mentality of profit at any price, with no concern for social exclusion or the destruction of nature?”

The Pope’s focus on poverty rings especially true for many living in the countries he’s speaking in. In Ecuador, over 25% of the population lives below the poverty line; that number jumps all the way up to 60% in Bolivia.

According to the Vatican, the overarching theme of the Pope’s visits is to bring “the Church for the poor.” The Pope is reaching out to the poverty-stricken people and regions of his native South America.

“The human environment and the natural environment are degrading together, and we can’t adequately confront human and social degradation without paying attention to the underlying causes,” the Pope said at a stop in Quito, Ecuador. “In today’s world, among the most abandoned and abused poor, we find the most oppressed and damaged land.”