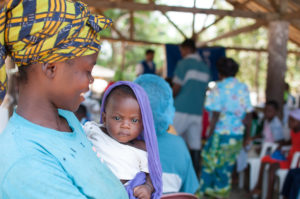 Liberia borders Sierra Leone, Guinea, Cote d’Ivoire and the Atlantic Ocean. The West-African nation was established as a settlement by freed American slaves in 1820. Despite gaining independence in 1847, the country suffered from years of instability brought on by the military coup of 1980. Civil war broke out in Liberia in 1986 and endured until late 2003. With 14 years of civil war devastating both the population and the economy, Liberia, now home to nearly five million immigrant and indigenous peoples, has shifted its focus towards recovery. Many efforts acknowledge the inadequacies of healthcare in Liberia, one of them being Last Mile Health.

Founded by Liberian civil war survivors and American healthcare workers in 2007, Last Mile Health is a nonprofit organization dedicated to rebuilding healthcare in Liberia by creating a stronger, more resilient public health infrastructure within both urban and remote regions of the country. To date, Last Mile Health is responsible for a plethora of noteworthy improvements in healthcare and health outcomes in Liberia.

Healthcare in the Past

Between 1986 and 2003, 80% of healthcare clinics across Liberia closed their doors as a result of looting, destruction and the exodus of healthcare workers. Only 168 physicians remained in Liberia, predominantly in the capital city of Monrovia. Medical training systems stood on the verge of collapse. Today, nearly 1.2 million people throughout Liberia live more than an hour’s walk from the nearest healthcare facility.

Lack of access to quality healthcare in Liberia has resulted in poor health outcomes for Liberians. Alongside suffering from one of the world’s worst maternal and under-5 mortality rates, malaria, diarrhea, HIV/AIDS and other preventable and treatable illnesses are amongst the leading causes of death and disease in Liberia. A mere 39% of children under two in Liberia have received their recommended vaccinations.

In 2017, Last Mile Health launched the Community Health Academy to strengthen the clinical skills of community health workers in Liberia. The Community Health Academy provides training to health care leaders to help them build resilient and effective public health infrastructure. As of 2019, more than 16,000 healthcare personnel from around the world have enrolled in the academy’s courses.

By increasing access to and quality of healthcare in Liberia, Last Mile Health has increased the number of children receiving malaria, pneumonia and diarrhea treatment by over 40%, resulting in a significant reduction in under-5 mortality rates and improvement in child health outcomes. Maternal health outcomes have improved as more women can access skilled birth attendants and facilities for delivery and maternal care.

The average life expectancy for Liberians continues to increase each year as healthcare in Liberia rebuilds and recovers. By linking community healthcare workers with nurses, doctors and midwives at community clinics and equipping workers with the knowledge and skills that they need, Last Mile Health continues to fulfill its mission of bringing life-saving care to people in even the most remote areas of the country.

Last Mile Health promises a future in which no patient is out of reach from quality healthcare in Liberia. In the years to come, the nonprofit organization intends to expand its reach within Liberia and across Africa.