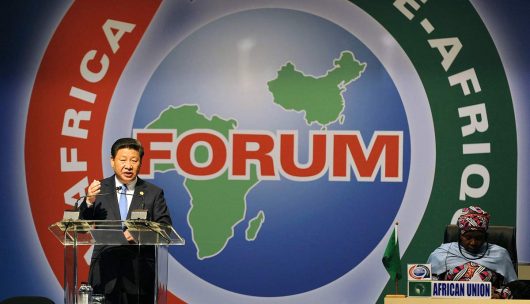 According to the Organization for Economic Co-operation and Development’s (OECD) report, in 2016, 30 countries in Development Assistance Committee (DAC) contributed a total of $142.6 billion as financial assistance to poorer countries, with the United States, Germany, the United Kingdom, Japan and France giving the largest foreign aid.

On average, the United States’ government has given approximately one percent of its federal budget — about $34 billion — each year over the past decade to countries in need of foreign aid.

Out of the aid amounts from all donor countries, U.S. foreign aid ranked at the top of the list. Non-DAC countries, like China, are also responsible for a significant part of the total aid amount.

Each year, developing countries receive aid in tens of billions of dollars from governments in other countries. From obtaining diplomatic approval to business access, this aid can serve various purposes for the donor countries. From agriculture, to education and public health, recipient countries use aid towards a wide variety of issues and projects.

Here is a rundown of the five countries that offered the largest foreign aid and how that aid was spent by its intended nations. Due to the lack of detailed information for 2017 fiscal year, the list will be based on previous-year statistics.

A surprise to many, the winner on the “aid list” is China rather than the United States. As a non-DAC country, China has not officially disclosed its aid information; however, in a recent publication, researchers from AidData at William & Mary claimed that during the year between 2000 and 2014, China offered $350 billion-worth of aid to 140 countries and territories, sponsoring more than 4000 projects – the largest foreign aid program in the world.

In 2009, China’s total financial commitment to development aid reached a whopping $69.9 billion, two times that of the U.S. foreign aid in the same year.

A large chunk of China’s aid is categorized by AidData as “Other Official Flows,” indicating that though counted as foreign aid, these financial assistances are primarily intended for commercial access rather than for development and welfare.

Top recipients of Chinese aid are largely members of the One Belt One Road Initiative, a program by President Xi that aims to reinforce trading routes across continents.

As a result, almost half of the aid was spent on infrastructure sectors including energy generation and supply, transportation, storage and communication. The spending on agriculture, forestry and fishing only took up 3 percent of the aid.

From 2002, the United States Agency for International Development (USAID) has gradually boosted the total foreign aid budget to a steady amount that rests around $32 billion. With the Department of State and USAID as the nation’s main donors, the U.S. government distributed — not counting fiscal worth of military assistance — $34 billion official development aid (ODA) to over 100 foreign governments during the 2016 fiscal year.

Such an amount makes the U.S. the largest foreign aid donor among DAC countries.

Israel, Afghanistan and Egypt are the largest recipients of the U.S. foreign aid, receiving $3.10 billion, $1.51 billion and $1.46 billion of assistance, respectively. More than one-third of the U.S. budget is spent on long-term projects that promote economic growth and public health programs.

About 23 percent of such aid is used as humanitarian aid, and aims to fund short-term disaster relief programs.

An important factor in accounting for this major boost is the wide-ranging social benefits provided to the large influx of refugees.

Before it was made a legal obligation by the U.N., the U.K. hit the 0.7 percent ODA/GNI mark in 2013 and has since maintained this ratio very well.

Pakistan, Ethiopia and Afghanistan each received more than $300 million in U.K. aid, and Nigeria, Syria, Sierra Leone, South Sudan and Tanzania all received more than $200 million. The aid is largely used for humanitarian programs and other crisis-relief projects in nations close to the European Union.

As the third-largest economy in the world, Japan contributes the fourth-largest ODA among DAC countries. Though Japan ranked high on the list of total aid volume, its $10.37 billion aid in fiscal year 2016 merely took up 0.2 percent of its GNI compared to the United States’ criticized 0.18 percent.

As a close tie to China in overall economy, Japan also engages in competition with China for potential markets in developing countries by giving out development aid. While China desires more of natural resources in recipient countries of its aid, Japan wants cheap land and labor so that it can compete with the world’s leading manufacturing industry in China.

Humanitarian Aid is on the Rise

As OECD’s report indicates, the world’s total development aid is on the rise. This trend is so prominent that DAC Chair Charlotte Petri Gornitzka expressed her delight in the ever-increasing trend and the generous contributions of the largest foreign aid donors.

With an increasing amount of ODA being spent on short-term humanitarian and refugee aid, Gornitzka urged countries to also focus on long-term development programs.

Regardless of the purposes of aids, this healthy trend of increasing aid showcases the collective efforts of the world in reaching the U.N.’s Sustainable Development Goals