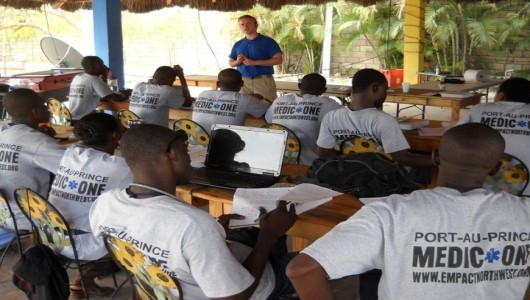 On April 25, a massive earthquake of magnitude 7.8 rocked the tiny country of Nepal. Widespread devastation resulted and the aftermath left hundreds of people entombed in concrete graves. As the international relief effort mobilized, smaller teams of volunteers responded from all over the world using money from their own pockets. One of these teams was Empact Northwest.

Empact Northwest, a nonprofit volunteer organization, hails from Kitsap County, Washington. They specialize in dispatching technical rescue operations locally, regionally, nationally and internationally to communities in need. The group’s motto is “Empathy in action” and on April 27, empathy turned into action when they deployed as Disaster Team 1 to Nepal.

The epicenter of the earthquake that struck Nepal was located in the Lamjung District northwest of Katmandu, a part of Gandaki Zone and one of the seventy-five districts of Nepal, a landlocked country in South Asia. The district, with Besisahar as its headquarters, covers an area of 1,692 squared kilometeres and has a population of 167,724, as of 2011. Lamjung mainly consists of agricultural villages.

After establishing an operation base in Katmandu, Disaster Team 1 became USA-11 by the United Nations Disaster Assistance Center (UNDAC) and were then assigned to the village of Lanmang. The team drove and hiked over rough terrain and demolished roads before they reached the village, where they provided rescue operations and conveyed vital assessment information to the UNDAC. Later, USA-11 partnered with a rescue group from Burnaby, British Columbia in the town of Barabise, conducting K-9 search and rescue tactics.

Empact Northwest is certainly not a newcomer to the international aid scene. The organization is only about five years old, but since its formation, inspired by work done after an earthquake in Haiti, it has been involved in numerous life-saving missions around the world. Empact Northwest offers technical rope and urban search and rescue as well as emergency medical services to disaster-stricken communities. Not only providing rescue, they also offer preventative education to at-risk populations.

In addition to the recent Nepal disaster, since 2010 Empact Northwest has responded to situations in Haiti, Pakistan, Japan, Sierra Leone and the Philippines, providing relief and rescue in catastrophes ranging from earthquakes to tsunamis. It also provides medical relief, logistics and educational mission projects.

Between catastrophes, Empact Northwest is not sitting around idly. The organization is working to provide emergency medical technician training to hundreds of people in Haiti in an attempt to help Haitians sustain a skilled medical work force.

There seems to be no shortage of tragedies in the world, but it is thanks to organizations like Empact Northwest that people are able to cope with these hardships as best they can. In just five short years, Empact Northwest has made an incredible contribution to the globe’s developing countries by saving lives in communities where poverty and hardship are made painfully worse by natural disasters.