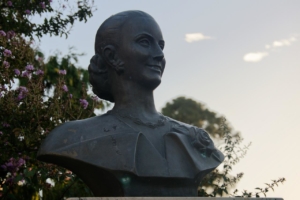 On July 26, 2022, Argentina commemorated the 70th anniversary of the life of former actress and First Lady Eva Perón, a leading figure for her contributions to social justice in Argentina. She is especially revered for the passage of the women’s suffrage law which has furthered women’s rights and equality in Argentina.

The Life of Eva Perón

Maria Eva Duarte de Perón was born on May 7, 1919, in the province of Los Toldos, Argentina. Despite her father hailing from a prominent and successful conservative family, Perón, unlike her older siblings, did not enjoy her father’s era of economic prosperity. Instead, she experienced times of hardship and poverty. After her father died in 1926, Perón’s mother relocated the family to the neighboring province of Junin, the town where Perón would realize her calling. Nearly a decade later, she decided to move to Buenos Aires to pursue acting.

In the capital city, Perón was a lead actress for the Argentine Comedy Company and appeared for the first time on the big screen in 1937. The 1930s were a difficult period for Argentina as it was a time of diversification, anxiety, recession and famine. By the early 1940s, the nation fell into political turmoil amid the coming elections.

After the earthquake of 1944, Perón met her husband Juan Perón, a colonel, government official and future president, at a relief effort he coordinated to collect donations for citizens affected by the earthquake. They were married the following year and in 1946, Juan Perón became President of Argentina.

Upon becoming First Lady of Argentina in 1946, Eva Perón, or “Evita” as she became fondly known, jumped straight into the political arena; she primarily worked out of the Central Post and Telecommunications Office, where she met with workers to solve labor disputes and wage issues. As First Lady, Perón took on the role of being a strong liaison between the president and his people. She used her status and resources to help women’s suffrage, laborers, the marginalized and the poor.

Throughout her short but impactful career as First Lady, Perón worked tirelessly to bring about real change for Argentinians. In the Perón family’s first moments in office, the First Lady actively participated in campaigns to aid Argentina’s poor. She liaised and distributed government allowances to construct clinics and give needy families food and other essential items. Perón also championed a policy that gave impoverished citizens access to reliable housing, social welfare and health care services.

Fight for Women’s Rights and Equality in Argentina

In addition to being a leading advocate for the underprivileged, Perón was a prominent figure in Argentina’s women’s suffrage movement. The suffrage movement in Argentina began at the start of the 20th century but would not gain full traction until 1946 during the campaign and election of Juan Perón for president when Eva Perón’s support helped to shine a spotlight on the importance of gender equality.

As part of her efforts, Perón created a mobilizing campaign, transmitting a weekly speech urging women to fight twice as hard to secure women’s rights in Argentina. On September 23, 1947, the women of Argentina would triumph, gaining their equal right to vote. After the victory, the Perónista party would restructure to create the Partido Perónista Feminino (PPF), an exclusively female party that Perón would spearhead. The PPF would be a central hub of political activities and social work.

The height of Evita’s influence and accomplishments in the years before her death in 1952 came through the formation of the Maria Eva Duarte de Perón Foundation in 1948. The foundation aimed to be a strong beacon of social justice that would match the country’s ongoing progress. Through the foundation, Perón would build homes for the elderly and implement a plan to construct educational institutions, agricultural schools, nurseries and housing spaces for students coming to Buenos Aires to study. The foundation would also provide juvenile medical examinations, temporary lodging for working women and donate essential medical equipment to hospitals.

The accomplishments of Eva Perón during her short career as a first lady and social warrior cemented her as an icon in the hearts and minds of the Argentine people. When she died on July 26, 1952, she received a funeral exclusive to heads of state and the title of “Spiritual Leader of the Nation.” Perón will continue to be honored for her selfless devotion to her people and social rights in Argentina.