Tag Archive for: Ladles of Love 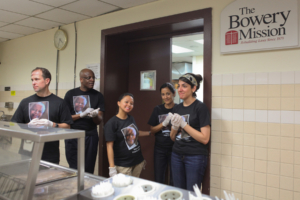 Food insecurity is a significant topic in Africa due to the ongoing coronavirus pandemic and environmental factors, such as drought. Recently, many South Africans have experienced rapid food shortages. However, various hunger initiatives in South Africa are taking off during this time.

In South Africa alone, 4 million migrants are at risk of descending into poverty. The number of South Africans currently living in poverty, 40% of the population, is expected to increase within the next five years. Those already in poverty do not have access to basic medical supplies and other life-saving resources. The COVID-19 pandemic only exacerbates these issues further. Many people grapple with economic fallout as a result.

Poverty disproportionately affects South African women, especially as heads of households. Around half of female-headed households are below the poverty line as opposed to 33% of male-run households.

Hunger initiatives in South Africa have proven essential in helping vulnerable groups like women and children.

Many food-based charities have dedicated their efforts to providing meals to those grappling with the impacts of the coronavirus pandemic. A soup kitchen called Ladles of Love is one such organization. The soup kitchen operates on the basis of Seva, the art of selfless service. The soup kitchen volunteers serve more than 200 meals a week to those in need.

Recently, Ladles of Love was featured in the Guinness Book of World Records for its efforts to provide healthy meals to the impoverished and hungry. The charity broke both the South African record and the world record for most sandwiches made in an hour. The previous world record was 57,000 — Ladles of Love eclipsed that by making more than 68,000 additional sandwiches. The charity also surpassed the South African record by 18,000. As a result of this, Ladles of Love could make more than 300,000 sandwiches and garner publicity and awareness for its cause.

Ladles of Love is part of the social media movement 67 minutes. The movement, started in memory of Nelson Mandela, emphasizes the importance of making a difference. The 67 minutes campaign encourages people to prioritize helping others for 67 minutes. The number 67 is significant because Nelson Mandela fought for social justice reform in South Africa for 67 years. As such, the campaign uses that number as a baseline for its work. Through social media, Ladles of Love increased publicity for the movement. More people are aware of the severe issue of hunger in South Africa. This will hopefully generate more funding and education about the topic in other parts of the world.

Organizations like Action Against Hunger have a world-reach goal in mind. The global nonprofit strives to end hunger and malnutrition within “our lifetime.” The group focuses on both preventative and reactionary measures to help provide food for those in need, especially children and families. Action Against Hunger works to empower people to help themselves rather than rely on its services. The organization believes that education, empowerment and innovation can crush world hunger.

Since the quarantine began, many South Africans have struggled to make ends meet. Most people were furloughed from their jobs and left without stable sources of income. Furthermore, the pandemic has impacted students especially hard. The government suspended its school nutrition programs and school students can no longer receive steady meals. Despite this, the government has attempted to rectify the situation by providing more than 1 million food packages for residents and constituents.

Many South Africans struggle to cope with the effects of the coronavirus pandemic, changing weather patterns and rising poverty levels. Ladles of Love, the 67 minutes campaign and Action Against Hunger provide support for struggling citizens. These organizations and other hunger initiatives work tirelessly to alleviate food insecurity among the impoverished population.