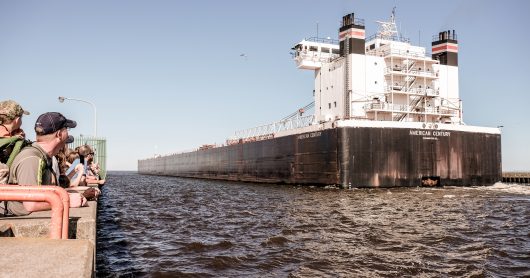 The Jones Act made headlines in the past month, an impressive feat for an obscure law almost a century old. The law requires a certain amount of U.S. ships to deliver aid and trade to other parts of the world. Lawmakers of the 20th century designed the act to protect the finances of U.S. maritime industries.

Puerto Rico has been in dire need of aid since Hurricane Maria hit the island. It requested an extension of a Jones Act waiver during the crisis, so emergency supply delivery would not be impeded. The federal U.S. government denied this request.

Defenders of the Jones Act include the International Longshore and Warehouse Union, the Marine Engineers Beneficial Association, the Inland Boatmen’s Union and the Sailor’s Union of the Pacific. U.S. labor unions support the Jones Act, believing the 1920s legislation protects U.S. jobs. However, the Jones Act does not help labor like it used to.

The Capital Research Center, in its outline of the Jones Act, notes why labor unions find this regulation so appealing. Its supporters declare that national defense depends on both a strong navy and a healthy maritime industry and that lifting such protections would result in significant job loss. However, what is good for overseas shipping is not necessarily good for the United States. The International Trade Commission discovered in 1995 that the Jones Act cost the U.S. $2.8 billion each year. Moreover, the restrictions caused ridiculous situations where lumber had to be trucked from Maine to Florida before it could then be sent to Puerto Rico by boat. The Jones Act has not stopped American generosity and trade, but it has certainly made both acts much harder. Even people given jobs by the U.S. maritime industry are hurt by rising gas and food prices from the $2.8 billion price tag.

Are these sacrifices worth enduring if the results lead to the survival of the shipbuilding industry? Linda Lingle, the former governor of Hawaii, believed that repealing the Jones Act would put American shipping companies out of business. But perhaps the Jones Act is not helping in that regard. Since 1946, the U.S. maritime industry removed roughly 2,000 vessels from its service, leaving it in 2007 with a fleet of fewer than 200. During that period of time, 200,000 jobs and 60 American shipyards were lost in the industry. According to the U.S. International Trade Commission, a “Jones Act repeal would affect about 2,450 laborers in the coastwise shipping trade and would cost only 36 jobs in the shipbuilding industry.”

Matthew Paxton, the president of the Shipbuilder’s Council of America, cannot deny the vestigial nature of the Jones Act even while defending it. Paxton explained to the Washington Examiner why labor unions support the Jones Act in September 2017. But he acknowledges that the shipbuilding business has shifted to Asian countries in the previous three decades. “The U.S. shipbuilders know they can’t compete fairly, so they rely on the federal government to keep this thing going,” said Paxton.

Ultimately, the Jones Act protects few jobs at the expense of the needs of the many. Richard Rowland, of the Grassroot Institute of Hawaii, states, “Greater competition in shipping would bring down prices and make the business climate more investor-friendly. Really, the only one being helped by the Act are the shipping interests.” If labor unions support the Jones Act for its protected jobs, then labor unions will have to question if Puerto Rico’s poverty is a fair cost.