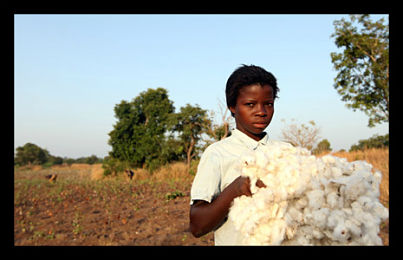 Look past the tag on your cute cotton underwear – it says a lot more than, “Made with 20 percent organic fibers from Burkina Faso.”

Look closer and you will see a young girl drenched in sweat, picking cotton for hours on end, often while being whipped in sweltering heat that often breaks 100 degrees Fahrenheit. She has been beaten, malnourished, barred from education and abused on a daily basis. She is never paid for her back-breaking effort and sleeps on the floor of a tiny hut. This scenario is more than a nightmare.

It has a name: child labor – and it is a dark reality for 13-year-old foster child Clarisse Kambire.

The organic and fair-trade cotton program she works for is located in Burkina Faso, one of the poorest areas in West Africa. The poverty-stricken country relies on cotton as its chief export and, consequently, ropes many others like Kambire into child labor every day.

Subsistence farmers involved in the program say that they are unable to grow “ethically sourced” cotton without forcing children into their fields. The conditions in the fields, however, obviously do not support this claim. Workers as young as five years old are abused physically, mentally and emotionally. They are also never paid.

Though the circumstance may seem to be a foreign issue, that is not the case; Kambire’s cotton can be found quite close to home. In fact, you may be wearing it yourself. The fibers from the cotton program are ultimately used to make underwear for the popular American retailer known as Victoria’s Secret. After a revealing interview, the company’s ethical standards began to be regarded with much public suspicion.

Her parents separated when she was four years old. After that, the girl was tossed between relatives on her father’s side. An aunt then took Kambire to the village of Benvar in Burkina Faso and left her in the home of 30-year-old Victorien Kamboule, the man for whom she now works in the cotton fields. Though the two are cousins, Kambire is also considered to be Kamboule’s enfant confie, a French term meaning, “a child who can be vulnerable to exploitation.”

After being dumped at Kamboule’s house and forced into hard labor at the age of nine, Kambire’s only comfort was her makeshift mattress: a thin, faded plastic mat in a tiny mud hut.

Her bedroom doesn’t boast much–a slender wooden bench, a few hand-washed clothes drying on a line and nothing else. No toys, no photos, not even a toothbrush.

At the same time Kambire is drowning in sweat and potentially deadly mosquito bites, Kamboule, his wife and their two children–a three-year-old girl and a one-year-old boy–sleep soundly underneath the safety of a mosquito net on a bed in an adjoining room.

Waking up is not much better; Kamboule only screams at her to get out into the field. Kamboule’s cruelty extends to every area of the field, not just sleeping arrangements for the workers. Sluggishness due to exhaustion is an error punished by severe whipping with a tree branch.

The fear of this punishment leaves the girl with a daily sense of dread. Every morning frightens her more.

“I’m starting to think about how he will shout at me and beat me again,” she says. “At night, I dream and wonder what can happen to me in the cotton field. I feel that something bad could happen to me.”

Cotton picking is not her only task. The 13-year-old girl also prepares the field by helping to dig over 500 rows with only a hoe–something that could be done easily with an ox and plow. Unfortunately, that is just the thing that Kamboule is unable to afford, and so he makes up for his lack of monetary funds with Kambire’s tears and sweat.

“I dream that a day will come when I shall no longer be working on the farm, but rather be in a kind of work which would be more interesting for me,” Kambire says. “Any other work would make me feel better, except for the farm work. I want to take care of my own needs.”