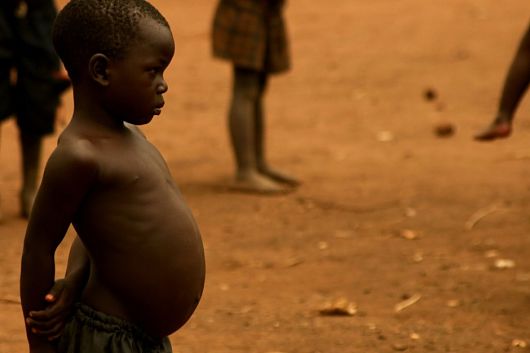 In the United States, we have generally come to associate a bloated stomach with obesity. Counter-intuitively, the same notion applies to undernourished or malnourished people. Many forms of malnourishment – the most widely known of which is Kwashiorkor – are characterized by bloated, distinctively rounded stomachs.

Although many forms of undernutrition, as well as malnutrition, can manifest in a characteristic big abdomen, Kwashiorkor is the most commonly known form of malnutrition with this symptom.

To understand the reasoning for this, it is important to know that in malnourishment, the rounded abdomen is not due to fat accumulation. Instead, the water retention and fluid buildup in the body cause the abdomen to expand. This results in a bloated, distended stomach or abdominal area.

The physiological reasoning behind this is the specific lack of certain nutrients, which determine which kind of nutritional deficiency it is. In Kwashiorkor, for instance, the caloric intake of the children affected is fine in that is it is not lacking in the energy needed by the body for metabolic processes. However, the diet is severely lacking in certain nutrients, particularly proteins.

Proteins in the body are responsible for the balance of osmotic pressure in the body, besides their structural roles. Proteins are generally macromolecules, which means that they are sizably large and not easy to transport through cells permeable membranes. The proteins can pass through the membranes only through special mechanistic procedures in the membranes and are otherwise found in the blood serum or lymph.

The presence of proteins in the lymphatic system of the body leads to a higher osmotic pressure in the lymphatic fluid, as compared to the water in the gut. This hypertonicity causes fluid to flow from the gut into the lymph fluid and eventually into the blood stream.

The regulation of water maintains a healthy distribution of water throughout the body. If this regulation is compromised due to protein deficiency, the buildup of fluid leads to distention of abdomen as well as fluid retention or edema.

This regulates the uptake of water back into the bloodstream, so the tissues are not over saturated with water. With a lack of proteins due to malnutrition, this mechanism of regulation is stunted and water builds up in tissues as well.

The buildup becomes more pronounced in the more severe cases, with fluid retention becoming apparent in other parts of the body besides the abdomen as well, such as facial areas.

The cure for edema developed due to malnutrition is to replenish the body with lacking nutrients. It is common practice to deliver simple carbohydrates and fats before administering proteins to achieve a normal blood pressure. The symptoms of malnourishment including distended abdomen may take a few days to alleviate. However, the impact on future growth and physical strength of children affected by this is permanent in nature.