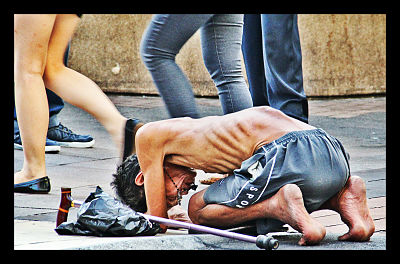 Malaysia has come a long way in reducing poverty, but in the capital city of Kuala Lumpur, many problems stubbornly persist.

In 1969, riots between ethnic Malays and Chinese broke out on the streets of Kuala Lumpur, killing hundreds. In a state of crisis, the government of Malaysia instituted a variety of reforms which would promote economic growth and equality. These reforms included the New Economic Policy and the National Development Policy. Though politically controversial, the reforms dramatically reduced the nation’s poverty level, raising the economy to that of a middle-income country.

Yet, with economic growth often comes urban poverty and an influx of migrant workers—two problems which trouble Kuala Lumpur today.

Like many rising cities, foreign workers contribute significantly to the economy of Kuala Lumpur. The government reports nearly ten percent of the city’s population is foreign-born, though this does not include thousands of illegal immigrants from neighboring countries.

A 2014 report by Al Jazeera found many workers from Indonesia, Bangladesh, Myanmar and Nepal struggling to get by in the city. Jobs promised to these workers never materialized and many were cheated by employment agencies. Now they face deportation or worse: a life of crime on Kuala Lumpur’s streets.

That same year, the Malaysian government banned foreign workers from taking low-paying jobs in the fast food industry, according to the BBC. Although cheap foreign labor has benefitted the Malaysian economy, the government is concerned native Malaysians may be losing out on jobs. Migrant workers, however, insist they are performing work locals don’t want to do, including 12 hour shifts for low pay.

This is all part of a larger problem involving mass migration in Southeast Asia. Thousands of workers and refugees are attempting to relocate to prosperous countries like Indonesia, Singapore, Malaysia, Thailand and Australia. They are either turned away by government authorities or taken in by shady employment agencies, who then confiscate their passport.

The issue drew worldwide attention last week as thousands of Rohingya and Bangladeshi refugees were stranded at sea. The Rohingyas, a predominantly Muslim group, are fleeing from government persecution in Myanmar. Malaysia, along with other nations, denied entry to the refugees.