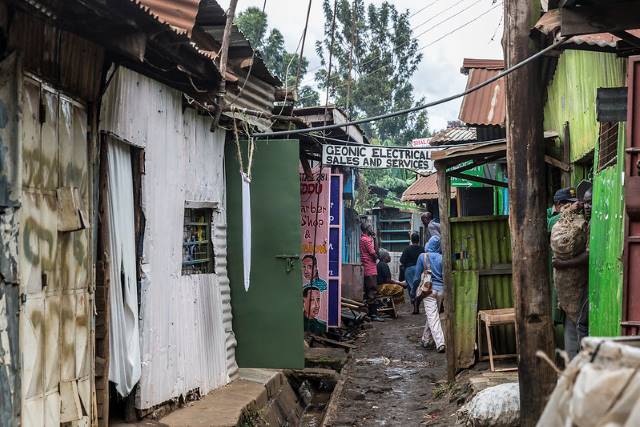 Kounkuey Design Initiative (KDI) is a nonprofit founded in 2006 by Harvard graduates who sought to combat “poverty, environmental degradation and social isolation.” The inquiry directed the focus of the graduates to Nairobi, Kenya, the birthplace of KDI co-founder, Arthur Adeya. Working with residents of an informal settlement called the Kibera slum, the graduates had an opportunity to put their skills to use in a community impacted by poverty, environmental destruction and social inequalities. While engaging with the realities of the slum, KDI was able to create a community model where the voices of Kibera residents contribute to the design process. By involving the voices of the community, KDI brought the definition of Kounkuey to life. After all, the Thai concept of Kounkuey means “to get to know something intimately.” KDI looked to address the common problem of flooding in Kibera, among other issues.

According to UN-Habitat, Kenya’s Kibera slum is the second-largest informal settlement in Africa. The estimated population in the almost 555 acres of informal housing ranges from 350,000 to one million people. The high population density coupled with “unplanned and crowded” housing as well as inadequate infrastructure makes the Kibera slum extremely vulnerable to flooding as a result of drainage issues.

The World Bank Group reports that Kenya is highly vulnerable to “climate hazards” such as drought and floods, “which cause economic losses estimated at 3% of the country’s gross domestic product (GDP).” Poverty and poor infrastructure are the major reasons why floods are extremely devastating in the Kibera slum. Since women and children are more vulnerable to the impacts of poverty, flooding in the Kibera slum impacts them significantly by destroying women’s kiosks and exposing children to water-borne diseases.

The poverty in the Kibera slum makes it more difficult for the dwellers to cope with flooding. Most of the residents survive on just $1 a day. The high unemployment rate in Nairobi makes it difficult for those trying to secure jobs in order to survive. According to a 2012 survey, 50% of the population experienced unemployment. Floods have major economic consequences, and for people already living in poverty, the impacts of floods exacerbate poor living conditions.

A survey conducted in the Kibera slum highlighted that half of the respondents’ homes were flooded in the 2015 rainy season. In May 2021, four people died near the Kibera slum due to flooding. The flooding has become increasingly dangerous, but for residents of the dense Kibera slum, moving to higher ground is easier said than done.

The Kounkuey Design Initiative started the Kibera Public Space Projects in 2006, aiming to build spaces that could meet the residents’ social and economic needs. There are about 12 projects, including a project that involves constructing bridges over rivers prone to flooding. Not only are the 12 projects vital for protecting people from the impacts of flooding but the projects also protect the socio-economic well-being of the residents of Kibera.

The Kibera Public Space Projects hope to reduce the fatal impacts of flooding, among other goals. The projects involve a series of goals that aim to bring the community together, create efficient drainage and improve social conditions. For instance, some public spaces incorporate “gardens and playgrounds with sanitary blocks, laundry spaces and educational facilities.”