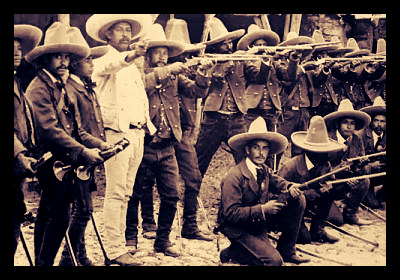 The cancerous effect of drug-related violence over the past six years has nearly stripped Mexico’s resources to the bone. Drug lords and cartel members have continued to control the better part of the region by striking fear into residents through brutal extortions, kidnappings, and murders.

This has all but halted the local economy, as many business owners are afraid to open up shop out of fear of reprisal. With more than 70,000 lives already lost to gang and drug-related violence, a recently approved initiative by the Mexican government has started to build its foundation in an effort to put an affirmative end to the war.

“Guys from the self-defense groups are moving around the city, co-operating in certain ways with the federal government. Many, many people have been detained,” said Hipolito Mora, the leader of an unlikely group of vigilantes who have arrested approximately 200 gang members.

These arrests come at the heels of a recently passed initiative allowing “self-defense” movements to assimilate and work with federal forces to combat violence and gang activities. These quasi-military units have sprouted up around Michoacan and have seen their membership grow into 20,000 strong.

The agreement was formed between the leaders of the Mexican vigilantes, army and police officers; President Enrique Pena Nieto’s envoy to Michoacan, Alfredo Castillo. Wearing white-T-shirts as a symbol of identification, the Rural Defense Corps, as referred to by government officials, recently breached the central square of Apatzingan, a stronghold and command base for the Knights Templar drug cartel.

Working with governmental forces, the Rural Defense Corps cleared the area out of cartel gunman who notoriously fired upon them in October 2013, when they entered the city unarmed in a convoy of hundreds. The recent presence of vigilante forces is a much needed boost for residents who have been forced to live under viscous rule for several years.

“We need to enter Apatzingan, which is the heart of the whole region and, as we all know, of vital importance for the criminal organization,” Mora said. Currently, the Knights Templar survives off a steady supply of methamphetamine and marijuana smuggling in addition to extortion and a controlling thumb over the local economy.

Since the beginning of January, these “self-defense” vigilante groups have launched a series of attacks against the Knights Templar gang in order to take back several overthrown municipalities in Michoaca in hopes of liberating communities. Many offenders have been arrested and detained through roadblocks around western Mexico in addition to door to door searches.

While such news is encouraging, atrocities and violence continue to remain a looming factor for rising forces. Recently, a mass grave with approximately 20 bodies was discovered in the Michoacan town of Tinguindin as well as four other murders in the nearby village of Zacan. While Mora believes these acts of violence to be retaliation for his group’s recent triumphs, he remains determined. “There can’t be any further delay, as that would put under risk the lives of so many people who are supporting our movement.”